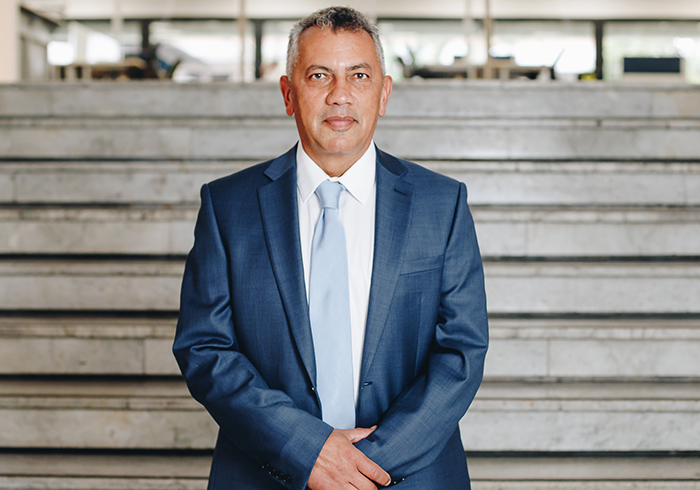 Jorge Osorio has been named the next director of the UW-Madison Global Health Institute. (Photo courtesy of VaxThera.)

A professor of pathobiological sciences in the School of Veterinary Medicine, Osorio will replace Jonathan Patz, who returns to his faculty appointments in the Nelson Institute for Environmental Studies and the School of Medicine and Public Health to concentrate fully on his climate and health work. Osorio will have a 50 percent appointment with GHI. He and Patz will work together on the transition beginning in late May.

“I am very excited and honored to lead UW’s Global Health Institute,” Osorio says. “During the past ten years, GHI has advanced important global health issues under the leadership of Dr. Jonathan Patz and his team. As the new director, I will build on their accomplishments, finding new opportunities for our faculty and students to investigate and find solutions to the world’s current health challenges.”

Osorio, from the School of Veterinary Medicine, has had a lengthy career in medical sciences, including virology, field epidemiological studies, vaccinology, antivirals and vector control programs. He is also the co-director of a Colombia-Wisconsin One Health Consortium, a joint effort between the UW-Madison and Universidad Nacional in Colombia that is studying emerging diseases and one-health issues.

“At GHI, I will encourage multicultural, international research collaborations that will bring equity and diversity to our campus.”—Jorge Osorio

“Jorge has a wonderful mix of research, teaching, industry and political experience,” Provost Karl Scholz says. “With the platform of GHI and Jorge’s foundational work with the Colombia-Wisconsin One Health Consortium, we are excited to see the Institute grow into the future as it expands its work with human, animal and planetary health throughout the world.”

Lyric Bartholomay, chair of the search committee, called Osorio uniquely qualified to step into the director role. “As a trained veterinarian and alumnus of the Veterinary Science program, he has devoted his career to the interdisciplinary practice of One Health—a lens that lifts up the health of people, animals and plants by recognizing the interconnectedness of all these players in healthy ecosystems,’ she says. “Dr. Osorio crafted his professional experiences to be at the ready for rapidly responding to global disease threats like bubonic plague, Zika and Dengue fever. He has tirelessly worked to create global connections, anchored here at the UW, to detect and respond to infectious diseases that impact people living in low- and middle-income countries.”

Bartholomay cited Osorio’s work with the One Health Consortium that played a critical role in addressing COVID-10 and anticipates the next pandemic and his vaccine company devoted to developing solutions for emerging disease threats.

Osorio earned his Doctor of Veterinary Medicine degree from the Universidad de Antioquia in Colombia and his master’s in veterinary science and doctorate in Animal Health and Biomedical Science from UW-Madison.

He recently founded VaxThera, a Colombian-based company that will produce vaccines and biologicals for Colombia and the region. He was a co-founder and chief Scientific officer of Inviragen, a biotechnology company that developed a novel chimeric tetravalent dengue vaccine that recently completed successfully Phase 3 clinical trials. He has also developed vaccines against chikungunya, influenza, rabies, plague and many other emerging infectious diseases.

Osorio has served as vice president of Research and vice president of Government Affairs for the Vaccine Business Division of Takeda Pharmaceuticals. His industry career also included positions at Heska Corporation in Colorado, Merial LTD in Georgia and Chiron-Powderject Vaccines in Wisconsin. He has more than 30 years of research and industry experience with more than 130 scientific publications in international journals and 32 patents.

“At GHI, I will encourage multicultural, international research collaborations that will bring equity and diversity to our campus,” Osorio says. “I will look for opportunities for international and U.S. students and researchers to work together and connect, and work to enhance the reputation and reach of UW science throughout the world.”

Patz applauded the appointment, citing Osorio’s “impressive track record in One Health and vaccine development, his dedication and success in building international partnerships and new centers, and his commitment to advance our mission toward sustainable health for all.”

The Global Health Institute was established in 2011, growing out of the Center for Global Health in the School of Medicine and Public Health and the Global Health Initiative. The Institute is dedicated to applying research, education and outreach to advance equitable and sustainable health across Wisconsin and the world. Working across disciplines, GHI fosters deeper understanding of the complex determinants of health and disease and the connections between animal, human and planetary health.

Patz has overseen an expanding portfolio of global health educational programs, grants and awards, interdisciplinary collaborations across campus, and public programming. “I don’t claim any individual responsibility for the accomplishments of GHI,’ he says. “Our successes have arisen from a team of multiple faculty leaders and capable staff dedicated to addressing health challenges.”

Under Patz’s leadership, GHI was a key partner in establishing several campus-wide initiatives, including the Undergraduate Certificate in Global Health, the 4W (Women & Wellbeing in Wisconsin & the World) Initiative, UniverCity Alliance, the Health-Oriented Transportation Initiative and the Graduate/Professional & Capstone Certificates in Global Health Online.

“We are very grateful for Jonathan’s many contributions during his time as director of GHI, as we look forward to learning from his ongoing important work on climate change and planetary health,” Scholz says.

Following his year-long sabbatical, Patz, a Vilas Distinguished Achievement Professor and John P. Holton Professor of Health and the Environment, plans to concentrate his work on the adverse effects of climate change and the human health benefits from climate action. Read more.