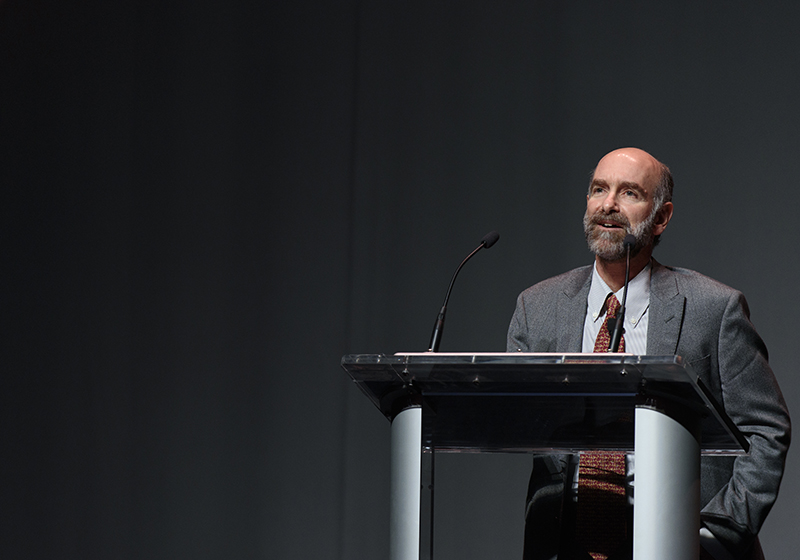 Jonathan Patz, the inaugural director of the UW-Madison Global Health Institute, is stepping down to concentrate on his work on health and climate.

Jonathan Patz, M.D., MPH, has announced his plan to step down as director of the University of Wisconsin-Madison Global Health Institute (GHI) in July 2022 to focus more on climate change and planetary health during his sabbatical next year and beyond.

Patz, the inaugural director of GHI, has overseen an expanding portfolio of global health educational programs, grants and awards, interdisciplinary collaborations across campus, and public programming. “I don’t claim any individual responsibility for the accomplishments of GHI,” he says. “Our successes have arisen from a team of multiple faculty leaders and capable staff dedicated to addressing global health challenges.”

“During his tenure as director of GHI, Dr. Patz has brought his passion about climate change and planetary health to the forefront of global health discussions here at UW,” says GHI Associate Director James Conway, director of the Office of Global Health in the School of Medicine and Public Health. “He has proven to be a champion for addressing environmental challenges through an integrated all-campus approach for Wisconsin and the world.”

“(Patz) has also mentored the next generation of public health leaders,” says GHI Associate Director Lori DiPrete Brown, director of Global Health for the School and Human Ecology and 4W (Women & Well-being in Wisconsin & the World). “His former students are leaders in medicine, public health, urban planning, epidemiology and more. As we look toward new leadership at GHI, I feel grateful. Jonathan has had a deep impact on all of us, and we are and will remain a sustainability-oriented global health institute.”

“Part of our mission has always been to link and leverage across the university. GHI promotes collaboration because global health is complicated and needs multiple perspectives. … We have walked the talk when it comes to a whole-of-campus approach to global health.”—Jonathan Patz

Following his year-long sabbatical, Patz, the Tony McMichael Professor of Planetary Health and John P. Holton Professor of Health and the Environment, will return to his dual appointments in the Nelson Institute for Environmental Studies and the Department of Population Health Sciences in the School of Medicine and Public Health. He plans to concentrate his work on the adverse health effects of climate change and the human health benefits from climate action.

Patz will focus on climate and health

Patz, who will focus 100 percent of his time on climate change and public health, is a pioneer in the field. His work was recently recognized with a 2020-2021 Wisconsin Alumni Research Foundation (WARF) Named Professorship for distinguished research contributions of the UW-Madison faculty, and he was elected to the National Academy of Medicine in 2019. Patz convened the first-ever session on climate change for the American Public Health Association in 1994. He co-chaired the health report of the first U.S. National Assessment on Climate Change to Congress and, for 14 years, served as lead author for the United Nations Intergovernmental Panel on Climate Change. The panel was a co-recipient of the Nobel Peace Prize in 2007.

“There are so many confluent actions that are happening now in the area of health and climate change and a new urgency for action,” says Patz, noting the recent United Nations’ COP26 climate conference and the Biden agenda for clean energy, including a new Office of Climate Change and Health Equity in the Department of Health and Human Services.

Patz was named the first director of the Global Health Institute in 2011. The new unit emerged from the Center for Global Health that had been established in the health sciences schools and became a campus-wide Global Health Institute soon after publication of the 2009 UW-Madison Reaccreditation Report, “For Wisconsin and World: A Great Public University.” The report called for the university to adopt a more global focus in our globalized world.

During his tenure, GHI has been instrumental in significant collaborations across campus, including establishing:

In the last 10 years, GHI has also awarded nearly $2 million in grants to faculty, staff, clinicians and students from across campus, hosted more than 110 global health seminars and 10 global health symposiums.

“Part of our mission has always been to link and leverage across the university,” Patz says. “GHI promotes collaboration because global health is complicated and needs multiple perspectives. … We have walked the talk when it comes to a whole-of-campus approach to global health.”

Applications are now open for the position of Director of the Global Health Institute. The director is expected to provide visionary leadership to advance the mission of GHI and UW-Madison global health activities as well as lead strategic planning, foster strategic partnerships and provide leadership to secure extramural funding. It is a half-time position.

This is an internal posting, open to UW-Madison faculty and academic and clinical staff. For more information, visit Jobs at UW-Madison, then search Internal. There are two listings: one for tenure-track and one for non-tenure track applicants.

The position presents opportunities for a new director, who will join an organization with an established reputation and be able to create GHI 2.0, Patz says. The Institute has a robust grants program, a well-functioning staff and significant outreach activities in place. “We’ve started all these things,” Patz says. “The new director will have the flexibility to be innovative and determine the next iteration of GHI.”

Questions about the application process can be directed to Karen Aune.