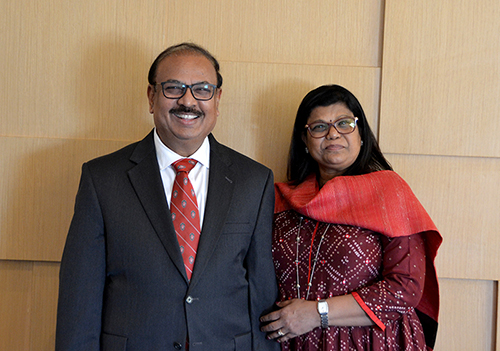 Krishna and Suchitra Ella are the founders of Bharat Biotech. The company has delivered over 4 billion vaccines–improving lives worldwide.

Often, diseases that emerge in the developing world are overlooked by researchers, with little effort going toward the development of new drugs to treat or prevent. Some of these diseases, SARS, H1N1, and zika have captured global attention, though many others persist with little mention nor attention.

However, these diseases can have a profound impact if left unchecked.

Treating and eradicating these diseases has been the lifelong goal of Krishna (PhD ’93) and Suchitra Ella, cofounders and joint managing directors of Bharat Biotech, a biotechnology company based in Hyderabad, India, specializing in researching and manufacturing vaccines and bio-therapeutics.

Through their persistent efforts, Bharat has more than 160 patents and has delivered over 4 billion vaccines to people in 123 countries. Their research and development have led to advances in the fight against maladies including COVID-19, rotavirus, Zika, typhoid, and hepatitis-B—potentially saving millions of lives.

The University of Wisconsin–Madison has recognized these extraordinary contributions by awarding Krishna the Distinguished Alumni Award in 2011 and an honorary degree in 2022.

The road leading through Wisconsin

The Ellas, including their young daughter, moved into Eagle Heights and quickly connected with the community, enjoying such favorite pastimes as eating Babcock ice cream, attending Badger games, walks to the Memorial Union, and even Wisconsin winters. Their family also grew, with the birth of a son.

“Wisconsin has a family feel, a human touch, so that you feel at home,” Krishna recalls.

At UW, Krishna studied closely with faculty including Arthur Kelman, John Andrews, Christen Upper, Doug Andrews, Susan Hirano, and John Helgeson, among others, who he describes as “wonderful teachers.”

They also provided counsel that would shape his career.

Helgeson encouraged Ella to make his next step exploring human and yeast molecular biology and medical sciences from plant pathology. After receiving his PhD in 1993, Krishna accepted an NIH fellowship from the Medical University of South Carolina in Charleston, where he and Suchitra remained along with their family until 1996 when they decided to return to India.

Upon returning to India, the pair considered how they could make an impact.

Their first idea was to set up a biotech park similar to the University Research Park, bringing the Wisconsin research concept to India. However, after further consideration, they instead decided to become first-generation entrepreneurs by establishing a laboratory through which they could focus on safe, affordable vaccinations and would subsequently cofound Bharat Biotech International, with a mission to serve the 5.8 billion population of the developing world & emerging markets in the arena of public healthcare.

“There was so much we felt we could do in this part of the world,” said Suchitra. “Our experiences, knowledge, and skills would allow us to make a great impact here. We decided that if we wanted to pursue the entrepreneurial route, we would need to do so in India or the U.S. as we had spent ample time in both countries. Anywhere else would not have felt as natural.”

Furthermore, they made the decision early on to avoid competition with multinational pharmaceutical companies, in favor of finding their niche.

“I didn’t want to copy multinationals, instead I wanted to focus on neglected diseases, which are problematic in the developing world,” said Krishna. “Diseases that impact developed countries often originate in the developing world. This is a niche where I knew we could create our own intellectual properties.”

Krishna cites diseases such as SARS, Corona, H1N1, and Zika as examples of these neglected diseases—all of which Bharat has made major headway in researching and producing vaccinations.

The cost of vaccines and therapies has been another area of focus for Bharat Biotech. Where pharmaceutical companies are often equated with maximizing profit, Bharat has instead worked to maximize accessibility by reducing cost barriers.

One example of this is the development and distribution of ROTAVAC, a vaccine against rotavirus—the most common cause of severe diarrheal disease in young children worldwide, primarily in developing countries, according to the WHO. ROTAVAC, produced in collaboration with global partners, is offered at only $1 per dose, a fraction of the price charged for other rotavirus vaccines.

“The challenge for us is to produce vaccines of the same quality at a fraction of the price,” said Krishna. “There is always a perception when people hear that it is produced for a low price, it is a low quality. But the quality standards that other producers follow, we follow exactly the same.”

“ROTAVAC changed the game on how affordable a vaccine could be produced and distributed around the world through a public and private partnership, the Indo-US Action Program under which this program had started,” said Suchitra. ROTAVAC is now part of India’s Universal Immunization Program.

The trend of offering affordable vaccines has continued with Covaxin, India’s first COVID-19 vaccine. The indigenous vaccine was developed in collaboration with the Indian Council of Medical Research-National Institute of Virology and costs only $3 a dose.

Since the time of its founding, Bharat has had several more successes, developing an eco-friendly hepatitis-B vaccine (Revac-B+), typhoid conjugate vaccine (Typbar TCV), and leading in developing vaccinations for Zika and chikungunya.

Having delivered over 4 billion vaccines and providing hope in spaces that have gone unaddressed, Bharat Biotech is positioned to lead well into the future, improving lives in India and the world beyond.

This story first appeared on the UW-Madison International Division website.