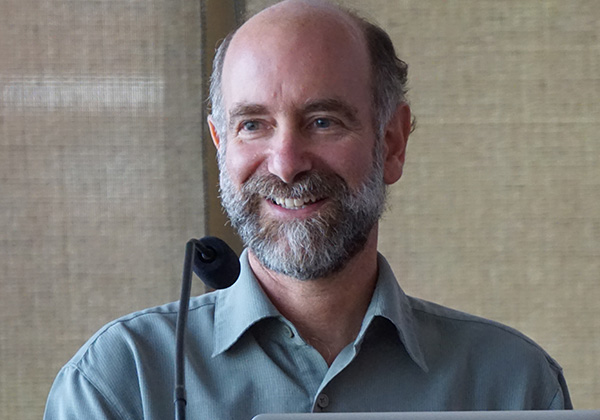 Jonathan Patz, M.D., MPH, director of the University of Wisconsin-Madison Global Health Institute, has been elected to the National Academy of Medicine in recognition of his pioneering research on the connections between climate change and human health.

Patz, the John P. Holton Chair of Health and the Environment with faculty appointments in the Nelson Institute for Environmental Studies and the Department of Population Health Sciences, helped establish the study of climate and health, a topic that has emerged as a cornerstone of international conversations about the climate crisis.

Patz sees his election as another golden opportunity to share his work showing the connection between climate and health and how to improve both.

“In the early 1990s, no one was talking about climate change as a health issue,” Patz says. “When I organized the American Public Health Association’s first-ever session on climate change in 1994, I never could have imagined the topic becoming the overarching annual conference theme, with nearly 40 sessions dedicated to climate change and health, in 2017.”

The National Academy of Medicine is one of three academies that make up the National Academies of Sciences, Engineering, and Medicine, established in 1863 by Congress. The academies are private, nonprofit institutions that work outside of government to provide objective advice on matters of science, technology and health. No more than 90 regular and 10 international members are elected annually in recognition of their professional achievement and commitment to service. (Read the Academy’s news release.)

The health implications of climate change and the benefits to health of mitigating carbon emissions have become central to climate discussions across the world. The United Nations has called climate change the defining issue of our time. The World Health Organization this year listed air pollution and climate change as one of the top 10 threats to health.

“For the Academy to honor a health scientist like me, whose career has been dedicated to climate change issues, recognizes the urgency of action on climate change and sends another signal on the importance of the topic to medical practitioners,” Patz says.

As he’s become a champion for health in the face of climate change, Patz has seen considerable progress at all levels—from the UW-Madison’s recent recognition as a sustainability leader and platinum-level bike-friendly campus to city and state initiatives to eliminate carbon emissions by 2050. Cities and countries across the world are pushing toward emissions reductions set by the United Nation’s 2015 Paris climate accord.

Patz’s work with students and colleagues has supported that progress. The published findings from these teams have documented an increased risk for asthma due to climate change; the relationship between heat wave mortality and latitude, the association of Hantavirus outbreaks with El Niño, the relationship between waterborne disease outbreaks across the U.S. and heavy rainfall, the link between South American cholera outbreaks and childhood diarrheal diseases to El Niño, altered mosquito-borne malaria and dengue fever risks from projected climate change and increased malaria risk from land use and climate change in the Amazon. Research by Patz and his team showed that replacing short car trips with bicycling would significantly cut emissions, illness and death and increase health..

Patz also has been a key leader in national and international climate discussions, serving as co-chair of the Health Expert Panel for the first U.S. National Assessment on Climate Change mandated by the U.S. Congress and as a lead author for 15 years on the United Nations Intergovernmental Panel on Climate change that shared the 2007 Nobel Peace Prize with former U.S. Vice President Al Gore. Patz’ 1996 article in the Journal of American Medical Association, “Global Climate Change and Emerging Infectious Disease,” remains a landmark paper and his 2005 paper, “Impact of Regional Climate Change on Human Health,”  in the journal Nature is the most cited scientific paper in the field. Patz’s research has received support from the National Science Foundation, National Institutes of Health, Environmental Protection Agency, NASA, Centers for Disease Control and Prevention and National Oceanic and Atmospheric Administration.

As he continues his quest to reduce carbon and improve health, Patz remains an optimist. Forbes columnist Chunka Mui was struck by Patz’ refusal to talk about worst-case scenarios until he could set the stage with best-case scenarios. “We’ve focused on the doom and gloom ad nauseum, (Patz) observed, and that hasn’t carried the day. Don’t get distracted by polar bears, he said, (confronting) the global climate crisis is the greatest health opportunity of our times.”

Patz is one of 100 new members announced today at the Academy’s annual meeting. New members are chosen by active academy members based on their contributions to the advancement of the medical sciences, health care and public health.

“These newly elected members represent the most exceptional scholars and leaders whose remarkable work has advanced science, medicine, and health in the U.S. and around the globe,” said National Academy of Medicine President Victor J. Dzau. “Their expertise will be vital to addressing today’s most pressing health and scientific challenges and informing the future of health and medicine for the benefit of us all. I am honored to welcome these esteemed individuals to the National Academy of Medicine.”