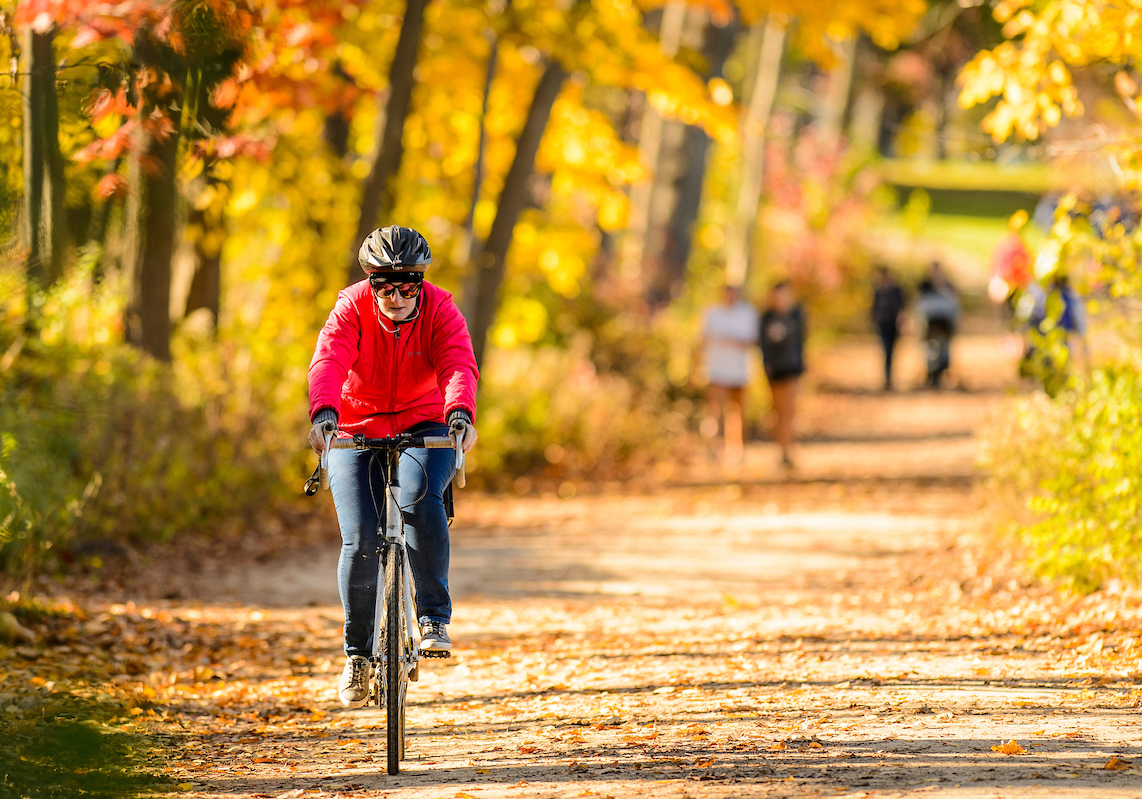 Pedestrians ride their bicycles and walk on a colorful tree-lined path at the Howard Temin Lakeshore Path during fall at the University of Wisconsin-Madison on Nov. 4, 2016. Photo by Bryce Richter / UW-Madison

The University of Wisconsin–Madison is one of only eight institutions honored as a platinum-level Bicycle Friendly University. The award is the highest given by the League of American Bicyclists, the oldest advocacy organization for people who bike.

Designations are given in bronze, silver, gold, and platinum, which is awarded for excellence across the board.

“These are the type of campuses that have a comfortable and safe bike network, excellent bike parking, great bike education programs, a supportive police force and just people on bikes everywhere,” according to the league.

UW–Madison had previously received a gold designation, given to universities with strong bike cultures but that may still need to offer more accessibility in their bike networks or reach more students and staff with bicycling education and encouragement programs.

“We are very proud of what UW–Madison has achieved in order to upgrade from gold to platinum level,” says Patrick Kass, director of UW Transportation Services. “A strong bicycling infrastructure encourages positive health and environmental choices and is essential to helping reduce motor vehicle traffic and demand for parking. We look forward to continuing to support and improve campus bicycle amenities as part of our Commuter Solutions program.”

Platinum level, according to the league, indicates a strong institutional-level bicycling program as well as active campus and local advocacy groups and student clubs supporting cycling. The Bicycle Friendly University program started in 2011; UW–Madison was recognized in 2011 at the silver level and upgraded to gold in 2015.

“By meeting one of the four award levels, universities and colleges demonstrate a commitment not only to fostering academic achievements, but also to developing model environments where people can safely bike and contribute to healthier, more sustainable outcomes,” says Bill Nesper, executive director of the league.

The UW’s renewal application and upgrade to platinum was supported by amenities and improvements such as:

Madison is consistently ranked as a top U.S. city for bicycling and has platinum-level Bicycle Friendly Community distinction.

As UW–Madison continues to improve its campus accessibility by bike, it will have access to a variety of free tools, a library of resources, and technical assistance from the league to become even more welcoming to people who bike.

To learn more about bicycling at UW–Madison, visit the Transportation Services website.