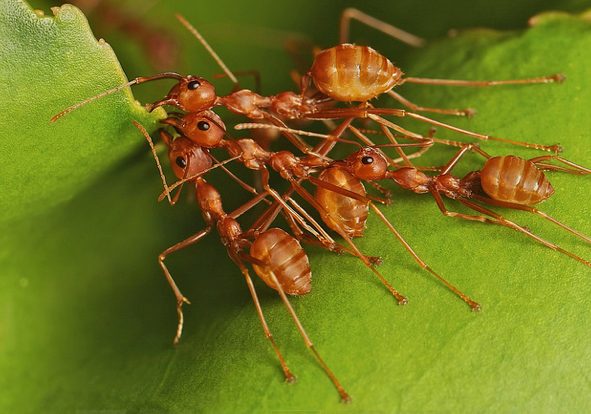 To the average American, insects are, at their most harmless, an annoyance — like mosquitoes. And at their worst, dangerous — like Lyme disease-carrying deer ticks.

But one project through the Global Health Institute demonstrates that insects can be so much more — like a sustainable protein alternative. Entomophagy, the scientific term for eating insects, is becoming a growing trend — one inclining significant research at UW.

Postdoctoral environmental health scientist Valerie Stull directs the Mission to Improve Global Health Through Insects, an initiative which examines the myriad of implications that might come with eating and farming insects — either for human or livestock consumption.

Stull said MIGHTi uses an interdisciplinary lens to analyze the social, environmental and public health-related effects these practices could have.

“We are assessing the impacts of insect farming on people’s livelihoods, health and agroecosystems,” Stull said.

Stull’s research happens both here and abroad — Stull said her team works with communities where entomophagy is already commonplace to study its impacts on public health and environment. They try to determine if these communities that eat insects may also be interested in farming them, and what effects that could have. The locations of these communities range from Zambia, South Africa, Uganda and Guatemala.

But why eat insects? To Americans who have never heard of entomophagy, the practice could seem unappealing. Stull, however, disagrees.

“Edible insects are fascinating because while humans have consumed insects throughout history, and about two billion people around the globe regularly consume them now, research on the subject is relatively new,” Stull said. “They are underexplored and underutilized on a global scale.”

Director of the Global Health Institute Jonathan Patz works through the institute to support Stull’s project, along with UW entomology and the Nelson Institute for Environmental Sciences.

Patz described some of the environmental benefits entomophagy could have on communities. Because insects are rich in high-quality protein and demand only modest resources like food, water, land and energy to rear, they may prove a sustainable alternative to other meat industries.

“The biggest hurdles that still remain are cultural norms in places unaccustomed to eating insects — like in the U.S.,” Patz said. “More research is still needed in address food safety issues, and our feeding studies are aimed to provide an answer in this area.”

Stull described overcoming these as a process toward cultural competency and communication — one that while difficult, also proves rewarding. It’s important to modify the narrative that insects are not food and share knowledge with groups both locally and globally, she said.

Moving forward, Stull plans to continue coordinating the logistics of efficient insect farming. One of her goals is to potentially rear insects to feed livestock in Wisconsin.

Her team is currently researching the “bioavailability of micronutrients found in insects” — essentially the potential nutritional value of insects — in hopes of moving this and other endeavors forwards.

“We plan to continue to investigate the social, environmental and health implications of insect agriculture broadly,” Stull said.

Patz said MIGHTi aims to have an effect on lower-income countries first to more efficiently enhance nutrition, and Stull outlined some of their goals in these countries and regions. Stull said MIGHTi hopes to provide user-friendly insect farming kits and training materials to farmers to test the impacts insect farming could have on health and nutrition at the household scale.

Stull’s team published several studies on the holistic effects of entomophagy in communities. One study focused on the effect cooperation between industry, government and academia can have when attempting to implement edible insects. Another focused specifically on a case study in Zambia, and the most recent study took a microscopic approach by examining the effects of cricket consumption on the human gut.

“I hope my research will have a global impact,” Stull said. “Simply changing the narrative about insects as food is an important piece of the puzzle.”

This story first appeared at badgerherald.com.