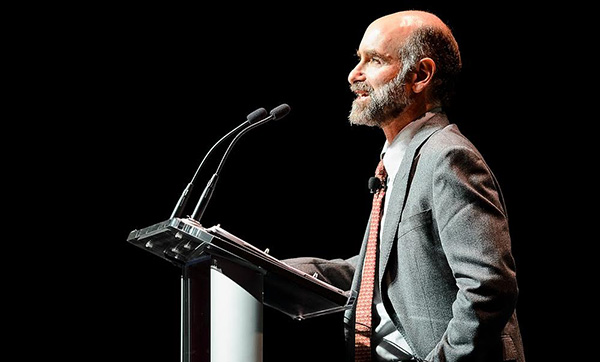 GHI Director Jonathan Patz's work in climate change and health will be honored with the Homer Calver Award from the American Public Health Association's Environment Division. (Photo by Jeff Miller/UW-Madison)

The American Public Health Association (APHA) will recognize University of Wisconsin-Madison Professor Jonathan Patz’s pioneering work in climate change and health when he receives the Homer Calver Award on Monday, November 2, at the association’s annual conference.

“Dr. Patz was selected because he is an international leader in climate change and health and has emphasized the translation of his research results into the practice of environmental public health in the field,” says Barbara Glenn, chair of the awards committee. “He is a long-time member of APHA and the Environment Section and was an early voice in the organization advocating that climate change is an urgent public health issue.”

“I feel so honored to receive this special award, and I’m even more delighted that APHA has shown incredible leadership in communicating its strong concern about climate change health risks,” says Patz, director of the University of Wisconsin-Madison Global Health Institute (GHI) and John P. Holton Chair in Health and the Environment with appointments in the Nelson Institute for Environmental Studies and the Department of Population Health Sciences.

In 1994, Patz organized the first-ever panel session on climate change for the APHA and later wrote the association’s first policy resolution on the threat climate change poses for health.

Now, his concerns are front-page news as international leaders from President Obama to

Pope Francis recognize the devastating effects of climate change on health and nearly all world governments meet in December for the United Nations’ Conference of Parties to negotiate a binding commitment to avert climate change, including actions to protect

human health. The consequences of climate change are a priority for the APHA Environment Section, Glenn says. APHA also has designated climate change and health as one of the organization’s few top priorities for advocacy.

In the early 1990s, Patz was a rare voice. He saw climate change as a linchpin preventive medicine issue that included energy policy, pollution, population growth and multi-pathway risks to health. “It was barely investigated back then, so I chased it with that much more fervor,” he says.

Patz would go on to organize the first climate change and health briefing for then-EPA Administrator Carol Browner. He was a lead author for the U.N. Intergovernmental Panel on Climate Change for 15 years and contributed to winning the Nobel Peace Prize in 2007. He’s testified before both Houses of Congress and co-chaired the health panel of the first congressionally mandated U.S. National Assessment on Climate Variability and Change.

Patz will lead a Massive Open Online Course, beginning November 9, that explores the intersection of climate change policy and health, and his recent book, “Climate Change and Public Health,”co-edited with Barry Levy, APHA past president, is a comprehensive core curriculum on the issue.

“Climate change poses enormous risks to our health, from heat waves and floods, to food security, infectious diseases and social disruption,” Patz says. Yet, he adds, “Climate change policy toward a clean energy society could be the greatest public health opportunity we’ve had in more than a century—especially in the face of accelerating rates of chronic diseases worldwide.”

Patz’s ongoing research, therefore, focuses more on the benefits of reducing the use of fossil fuels in terms of lives saved from less air pollution, lower meat diets and increased physical activity. “Moving to a low-carbon economy could have enormous benefits in terms of these three issues,” he says. “This is where I would say that policies to combat climate change would be a net financial gain. Studies around the globe are showing public health benefits (through lower health care costs and fewer deaths) more than outweigh the initial costs of replacing fossil fuels with cleaner energy sources.”