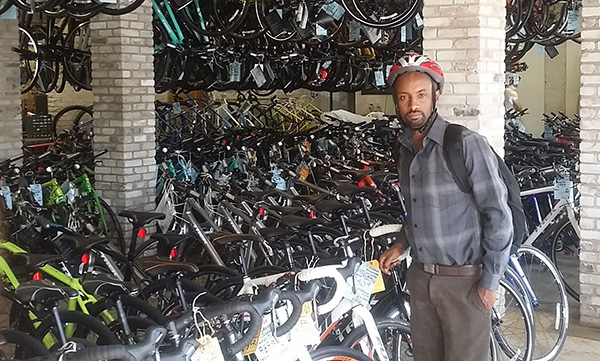 When the city of Bahir Dar, Ethiopia, looked for a way to reclaim its bicycling culture, it looked to the University of Wisconsin-Madison, an institution located in the midst of a bike friendly city and found a dedicated bike enthusiast to lead the charge.

“Bicycling is a historic culture for Bahir Dar city,” says Genet Gebreegziabher, director general of regional urban planning for the Amhara region that includes Bahir Dar. She and several university and government officials visited Madison recently to meet with city and university representatives.

“Most people want to bike, but they fear accidents, so they lost this habit. This project will help us continue this habit for the city and protect our environment.”—Genet Gebreegziabher, regional urban planner, Bahir Dar

UW-Madison Global Health Institute (GHI) Director Jonathan Patz, the John P. Holton Chair in Health and the Environment and an international authority on biking’s health benefits for people and the planet, has been a champion for the project. Patz and Assistant Scientist Jason Vargo from GHI and the Nelson Institute for Environmental Studies, are working with the UW-Madison Department of Civil and Environmental Engineering and leaders from Bahir Dar University (BDU), Bahir Dar and the Amhara Region to develop a bicycling plan for the city.

Bahir Dar is a lot like Madison—a university city on a lake, where children, students and young professionals are ready to ride bikes to school, to work and for pleasure. Eight years ago, 30,000 people rode their bikes regularly. That number has dropped to 10,000 with the arrival of bajajs, three-wheeled, motorized taxis that clog city streets and zig and zag through traffic, causing accidents.

What Bahir Dar doesn’t have—but is looking toward–are roads made safe for bikes, bike-sharing programs and a bike industry.

Getting traffic/bicycling right the first time

Growing at a rate of 6 percent a year in one of the world’s most quickly urbanizing regions, Bahir Dar represents an opportunity for planners to make existing roads safer and plan new routes that accommodate all forms of transportation before they lay any asphalt, Patz says. It gives Bahir Dar a chance to become a model city for the region and all of Africa.

“Cities in Europe and America are seeing that designing cities for only motor vehicles is short-sighted,” Patz says. “Why did we give up bicycles? We’re trying to get back to building streets the right way, which is not just for motorized vehicles.

“(Bahir Dar) is an opportunity to design the city expansion right the first time. This used to be a bike-friendly city. There’s a demand to reclaim that.”

Like Patz, David Noyce, chair of Civil and Environmental Engineering, sees an opportunity to learn from what the United States did right – and wrong – as cities expanded in the ‘50s and ‘60s. He also appreciates the opportunity to collaborate with Patz’s team and the Ethiopians.

Patz and Vargo met in June with Bahir Dar’s mayor, BDU’s president, heads of urban development, roadway authorities and the president of the Amhara Region. They shared possible bike lane solutions with Noyce before they left and looked for his advice on a related bridge project.

“Imagine the (Wisconsin) governor coming to a meeting about improving the bicycle culture of Madison and saying, ‘We have to do this.’”–Assistant Scientist Jason Vargo

In Ethiopia, they found the political will to move forward. “Imagine the (Wisconsin) governor coming to a meeting about improving the bicycle culture of Madison and saying, ‘We have to do this,’” Vargo says. That was what happened at the Bahir Dar meeting.

Bicycling offers physical fitness and environmental benefits, and it’s accessible for those with limited incomes who can’t afford taxis. “With all this in mind, we’re eager for this,” says Alemnew Mekonnen, ruling Party Secretary for the State of Amhara who also met with university and city officials in Madison.

East Africa is especially vulnerable to the effects of climate change, and Ethiopia is committed to reducing its carbon emissions by two-thirds in the next 15 years. The Ethiopian Prime Minister is advocating climate-saving policies for all of Africa, and “greening” is widely accepted, Mekonnen says. “This project is part of that and why the regional president has been interested. UW-Madison is critical.”

BDU’s Yimer Degu Ayicheh had a chance to ride a bicycle again when he visited UW-Madison in October to plan a pilot bike lane project for Bahir Dar,

Bicycling was a way of life for Ayicheh, but he sold his bike because he feared accidents. The Bahir Dar University, Bahir Dar Institute of Technology, Faculty of Civil and Water Resources Engineering lecturer and former chair of geotechnical and highway engineering was on two wheels as he and Vargo toured Madison from the university to city hall to bicycle shops and to see former Madison Mayor Dave Cieslewicz, now executive director of the Wisconsin Bicycle Federation.

The bicyclists checked out commuter crossings, automated bike counters and how intersections are engineered to safely accommodate bicycles and motor vehicles. Ayicheh rode on Madison’s bike lanes on busy and not so busy streets. “Now I can see it and feel it,” he says. “(The bike lanes) are so good, and I feel safe.”

He also used B-Cycle and would like to implement a bike sharing program in Bahir Dar, as well as establishing a bicycle factory.

Bahir Dar’s terrain is flat, and the climate is temperate, perfect for biking. “If we make something protected and safe, definitely people will bike again,” Ayicheh says.