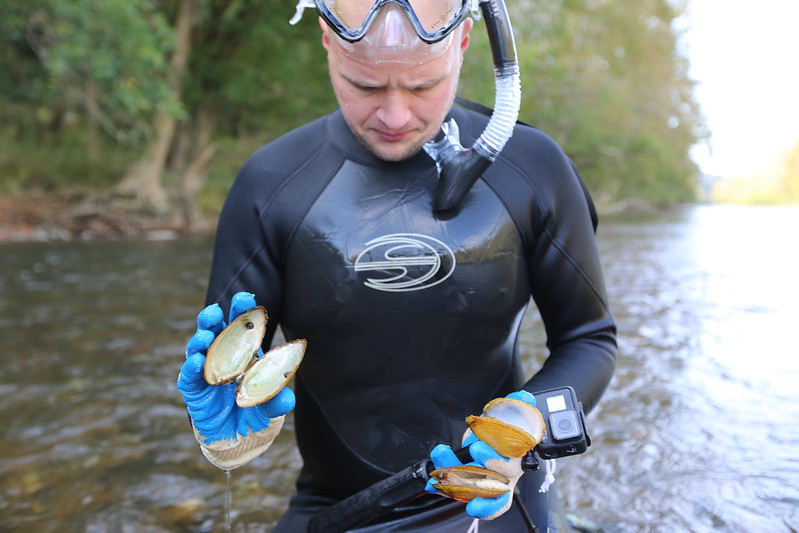 Until now, no one has been able to pin down why the world’s wild, freshwater mussels—often unnoticed and underappreciated engineers of stream and river health—are facing massive, unexpected die-offs. In a paper published today (September 2, 2020) in the journal Scientific Reports, researchers from the University of Wisconsin-Madison, the U.S. Geological Survey and the U.S. Fish and Wildlife Service in Virginia and Wisconsin find the first evidence that a virus could be the culprit.

The team studied mussels from the Clinch River in Virginia and Tennessee, a mecca for mussels, where die-offs began in 2016. The phenomenon is not just local, however. Unexplained mussel die-offs have been documented across the United States and in Europe.

Using approaches based on DNA sequencing, the team identified 17 viruses in the pheasantshells, most of them previously unknown to science. Only one of these viruses, a novel virus in the genus Densovirus, was clearly more prevalent in sick and dying mussels than in healthy ones. Densoviruses are known to cause lethal epidemics in invertebrates, including shrimp, cockroaches and sea stars. Some are so deadly that they are used commercially as biological pesticides.

“A large number of non-dangerous viruses live in freshwater mussels, just like in other animals or people,” says Jordan Richard, a U.S. Fish and Wildlife Service biologist, UW-Madison doctoral student and lead author of the study, “Mass mortality in freshwater mussels (Actinonaias pectorosa) in the Clinch River, USA, linked to a novel densovirus.” “But this is the first time a virus has been described that is linked to disease in wild freshwater mussels.”

Freshwater mussels are crucial to the health of streams and rivers, filtering water, cycling nutrients, stabilizing habitat and enhancing the food web. “If we lose mussels, the rivers, lakes and things that depend on them will never be the same,” says UW-Madison researcher Tony Goldberg, Ph.D., DVM, professor of Pathobiological Sciences in the School of Veterinary Medicine and member of the Global Health Institute Advisory Committee, calling the die-offs a global conservation and ecological crisis. “They’re foundational species for freshwater ecosystems.”

Mass mussel die-offs have been documented since the late 1970s, and while some have been linked to specific environmental changes or catastrophes, such as chemical spills, most remain a mystery. The Clinch River is home to 46 species of mussels, and 20 of them are endangered. The study—co-authored by researchers from the U.S. Fish and Wildlife Service, Southwestern Virginia Field Office and La Crosse, Wisconsin, Fish Health Center, and the U.S. Geological Survey Upper Midwest Environmental Sciences Center and National Wildlife Health Center—focused on infection as a potential, even likely cause, for the deaths.

The team looked to viruses because one mussel species, the pheasantshell, was dying in far greater numbers than other species, and the die-offs—claiming 50 to 90 percent of the animals at test sites—had been spreading upstream. Previous studies of other infections, invasive species or harmful changes in the environment failed to show any strong trends. The team also knew that viruses can cause epidemics in other bivalves, including the Lea plague virus that can decimate farmed populations of triangleshell mussels used to produce freshwater pearls in China.

The researchers caution that the study finds a strong association between the newly discovered densovirus and the dying mussels, but finding an association is only the first stage in a long process of further research. “There are a lot more steps before we can determine whether this association actually indicates a cause,” Goldberg says. “And, even if the new densovirus is killing pheasantshells, there may be other ‘upstream drivers’ that are affecting the mussels, perhaps making them more susceptible to the virus or helping the virus spread.”

The team is setting up an experimental infection lab at UW-Madison and will examine healthy, captive-reared pheasantshell mussels to determine whether this virus causes the disease. They’ll also put some healthy mussels into the Clinch River to see if they contract the virus.

“Right now, the annual wave of mortality documented since 2016 is about to get underway on the Clinch River,” Richard says. “By putting some captive-reared mussels out there, we’ll get an idea sense of whether healthy mussels will contract this newly-described virus and get sick.”

With years of data on mussel populations and ideal research conditions, Richard says the Clinch River could be a poster child for studying wild freshwater mussel die-offs. “But the Clinch is not alone in die-offs,” he says. “We have reports from rivers in the Pacific Northwest through the Midwest and into the Southeast, as well as Europe. The Clinch River is the tip of the spear on a giant volume of work that we’re trying to get underway across the country.”

Goldberg hopes the paper will give other researchers studying declines in invertebrates like mussels a reason to look at infectious disease—and at how this study was completed. “A major  achievement of this study is the fact that we were able to compare sick mussels with healthy ones,” Goldberg says. “In studies of wildlife infectious disease, one of the most powerful ways to tell which microbes are affecting health is to use a case-control study. In this instance, the care the team took in collecting mussels in the field was as important as the technologies used to identify viruses in the lab.”

The team will continue its study to determine what factors, including infection, might be causing the die-offs with funding from several sources, including the U.S. Fish and Wildlife Service, U.S. Geologic Survey and state departments of natural resources. Other agencies have participated in the effort, including the U.S. Fish and Wildlife Service hatcheries, the Virginia Department of Wildlife Resources and the Tennessee Wildlife Resources Agency and Virginia Polytechnic Institute and State University.

“What’s rewarding is that we’re finally beginning to unravel and make some sense of this,” Richard says. “People have put decades of work into restoring freshwater mussels and river habitats. We cannot allow a disease to come in and wipe that out.”