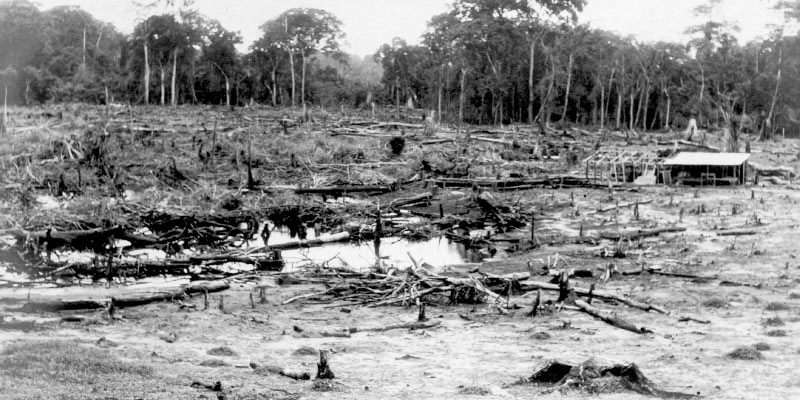 The Firestone Plantations Company cut and burned the rainforrest to make way for the planting of rubber tree seedlings. (Image by Loring Whitman, 1926. Courtesy of Indiana University Libraries.)

Nearly 6,000 miles separates the United States and the West African country of Liberia, but their histories are forever intertwined. In fact, Nelson Institute affiliate Gregg Mitman, who also serves as the Vilas Research and William Coleman Professor of History of Science, Medical History, and Environmental Studies at the University of Wisconsin-Madison, says that to better understand the history of racial injustice and exploitation in America one must also understand Liberia’s history. Through his new book, Empire of Rubber: Firestone’s Scramble for Land and Power in Liberia, Mitman explores this history, specifically looking at the ways in which the Firestone plantations in Liberia impacted, and continue to impact land use, the environment, the economy, and racial injustice in both countries.

Mitman became interested in this unique shared history when he unearthed footage from a 1926 Harvard expedition to Liberia, which completed an extensive biological and medical survey of Liberia.

Mitman presents findings from the book at the February 22 Global Health Tuesday webinar, “Empire of Rubber.” He will discuss how medical

“As a historian of science, medicine, and the environment, I became intrigued by the purpose of this Harvard venture,” Mitman shared. “I thought I was going to write a book about the history of American biomedical research in Liberia, but as we started traveling and interviewing people about the film footage and photographs, Liberians we spoke to were less interested in the biomedical aspects, and were more focused on questions of land dispossession.”

As Mitman reviewed the film, he discovered that the expedition took place during a time when Firestone, an American tire and rubber company founded by Harvey Firestone in 1900, was negotiating with the Liberian government for a lease of up to one million acres of land to grow rubber trees.

“I learned Harvey Firestone gave $20,000 to publish the expedition account,” Mitman said. “The corporate backing of a Harvard scientific expedition raised questions about the role of American science and medicine in the expansion of the American corporate empire across the world. And that led to writing this book about the history of Firestone in Liberia.”

Mitman’s research in this area became an expansive project that embraced many collaborators, including Nelson Institute alumnus and Liberian, Emmanuel Urey who has extensive experience with land rights throughout Liberia. This collaboration would serve as a catalyst for a variety of projects that outline the impact of the Firestone plantations on both Liberian and American history.

However, the story of Firestone in Liberia begins long before the company, or the 1926 expedition, arrived. Characterized by a mix of coastal plains, tropical rainforests and semi-deciduous forests, the West African area that would become Liberia had been inhabited for centuries by a number of indigenous peoples. In 1816, a group of prominent white abolitionists and slaveholders in the United States formed the American Colonization Society (ACS) to support the establishment of a colony in West Africa for the resettlement of free Blacks living in America, many of whom had previously been enslaved.  The settlers brought a Western system of private property ownership alien to the customary practices and cultural beliefs of the area’s indigenous inhabitants.  To “sell” or “buy” land was not a widely held West African concept.  Chiefs were the custodians, not the owners, of the land. Land was instead held in common by the community.  Although Liberia eventually became the first African republic to declare its independence, these different relationships to land continue to impact lives and livelihoods in Liberia.

“That focus on the meaning and values of land is an important element of the book,” Mitman said. “When we talked to people about the meaning and importance of the 1926 Firestone concession today, people would point to the issue of land dispossession.” Mitman explained that in 2018, about 50 percent of land in Liberia had been leased long-term to companies in the rubber, oil palm, mining, and timber industries.

He added, “If you dig deeper, some of these concessions for oil palm were built on the concession of a former rubber concession. So, you find these historical layers of concession upon concession going back to Firestone.” These concessions and the impact of land dispossession are not only highlighted in Empire of Rubber, but they are also the basis for Mitman and collaborator Sarita Siegel’s 2016 film, The Land Beneath our Feet, which follows then Nelson Institute student Emmanuel Urey as he returns to his home in Liberia to share the Firestone footage with his community and discuss how the Firestone concession shaped land rights in Liberia.

Urey, who studied Environment and Resources at the Nelson Institute, was focusing his research on land rights and also working as a consultant to the Land Authority in Liberia when he met Mitman.  At the time, the Land Authority, a government-sponsored commission, was working to develop a series of land reform recommendations that would reduce land conflicts in Liberia and give legal recognition to customary rights to land for the first time in the country’s history.  The film, and Urey’s work with the Land Authority and civil society organizations committed to land reform, helped lead to the passage of the Land Rights Act in 2018.  The Land Rights Act explicitly recognizes the customary land rights of millions of rural Liberians and is regarded as one of the most progressive land reform laws on the African continent.

“We often think about plantations as in the past. We associate them with the era of slavery. But the plantation as a particular formation of capital, land, and labor designed to produce monoculture crops that are turned into profitable commodities is still alive and well,” Mitman said. “It exists throughout the world, most evident today, for example, in the form of large oil palm plantations in Liberia and Southeast Asia. Although no longer dependent on unfree labor, the industrial plantation of today has elements of land dispossession, labor exploitation, wealth extraction, and environmental decimation inherent in its past iterations.”

Mitman said his book also explores how this plantation methodology impacts the environment and what we can learn from our past to help us adjust for a better future.

“I write about the industrial ecologies of the plantation. How does this particular amalgamation of people, plants, land, and inputs­—because you need pesticides and fungicides to support this monoculture crop—impact workers and those living in the surrounding area. The relationships and structures of plantation life differentially affect people working on the plantation in terms of toxic exposures, wages, and medical treatments. Plantations also create conditions of possibility for certain diseases to arise.”

For example, Mitman shared that river blindness, a parasitic disease that involves a blackfly, flourishes when rainforest is destroyed, and rubber trees are planted in their place. He said, this, along with a large labor population, creates a habitat where a biting blackfly and the parasite thrive, making river blindness endemic in areas of Liberia.

Mitman also discusses plantation labor and the medical and social treatment of these workers.

“That’s another dimension of the book. The way in which Firestone exported Jim Crow policies to Liberia and the kind of racial logics that went into the structure of the plantations,” Mitman said. “At their peak in the late 1940s, the Firestone plantations had 30,000 Liberians working under 120 white managers. So, you have this racialized system of labor.”

Mitman continued, “One of the things I think is important, particularly for American readers, is for them to understand the historical importance of Liberia to the United States and how integral Liberia is to U.S. history in this moment when there is a lot of discussion around the reckoning of racial injustice. Even the founding of Liberia is an important dimension to understanding the history of racial inequality and oppression in America.”