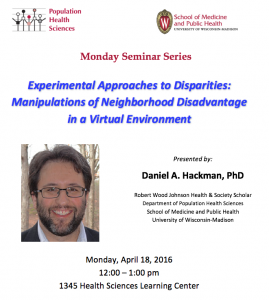 Neighborhood disadvantage is an independent predictor of health and development.  However, the breadth of causal inferences that can be drawn regarding neighborhood effects is limited due to the conceptual and methodological challenges of large-scale interventions.  Moreover, it has been hypothesized that neighborhoods influence health, in part, through how social and physical environments impact emotion, health behavior, and stress reactivity.  Nevertheless, support for this hypothesis is limited, as no studies have directly measured the acute effect of exposure to different neighborhood contexts on physiological or psychological functioning in real-time.  In order to address these issues I developed a virtual reality (VR) based experimental model of neighborhood disadvantage and affluence that can be flexibly deployed to investigate the causal effects of acute exposure to differing neighborhood conditions on cognition, emotion, behavior, and physiology.  This project leverages the increasing sophistication and accessibility of VR technologies that allow for an immersive experience approximating the experience of being in different neighborhoods.  The experimental protocol involves navigating routes in a virtual city designed with two distinct neighborhoods that are differentiated by building types, street layout, signals of social and physical disorder, and other features that differ between neighborhoods.  This presentation will discuss the development of this experimental model, as well as the early results from a first study using this approach aimed at assessing the validity of the protocol and testing the hypothesis that neighborhood disadvantage elicits greater cardiovascular stress reactivity and emotional responses.  In addition, this talk will present plans for a second set of studies to extend this model and examine its transportability.  Once this basic experimental protocol is developed and validated, it will be able to address a range of questions concerning some of the causal mechanisms by which neighborhoods may influence health and how this may vary across development and populations.