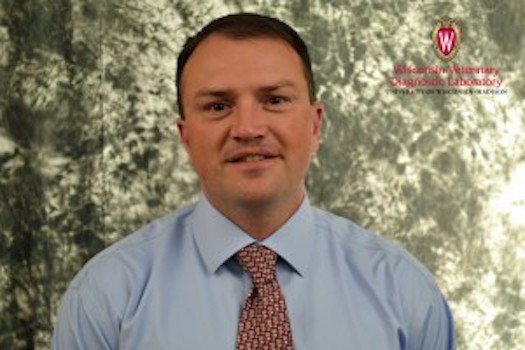 The Wisconsin Veterinary Diagnostic Laboratory (WVDL) has a new director. As of Sept. 1,  University of Wisconsin–Madison veterinarian and GHI Advisory Committee member Keith Poulsen assumed official leadership of the agency, which plays a critical role in preserving animal health and the integrity of the state’s animal production industry.

“I think we have a very important mission for the state and for the university,” says Poulsen, who had served as interim director of WVDL since March 2018. He first arrived at the agency in 2014 as a clinical professor at the UW–Madison School of Veterinary Medicine (SVM), practicing large animal internal medicine.

The WVDL was first established in the early 1930s with the goal of providing animal disease diagnostic services to the state’s veterinarians and animal producers. It is located and administered by the UW–Madison campus as part of the University of Wisconsin System and is specifically funded as a line item in the state budget.

Poulsen describes WVDL as “a hybrid of a state agency and a business.” With between 120 and 130 employees, the lab runs roughly 600,000 diagnostic tests each year, handling upwards of 38,000 cases. Nine out of 10 of these cases serve the state’s $250 million-a-year bovine (cow) genetics industry and its $43.4 billion dairy industry. The WVDL tests bull semen for export around the world to serve meat and dairy producers.

Beyond bovines, WVDL also supports the state’s poultry industry by helping respond to outbreaks of avian influenza, participating in the federal Salmonella Action Plan and the National Poultry Improvement Plan, and playing a role in maintaining flock health. It promotes health among all other animal species as well.

Though Poulsen has a passion for animals, he says it is the people at WVDL who have helped make his new role rewarding. “We have a great team of people and we are very focused on the working culture of our organization,” he says.

Among his first priorities is investing in these people, shifting to a team-based approach and ensuring his employees know they are valued.

“We are investing in our staff because they are the scientific minds and the people who get the testing in and done, and the customer service done,” Poulsen says.

He is also focused on engagement, inclusion and diversity. Mark Markel, the dean of SVM, says Poulsen helps reinforce a welcoming environment and has created a climate where people want to show up for work every day, in part because he promotes good work-life balance.

“For a director to do that is important and really critical to the success of an organization,” Markel explains.

Poulsen feels fortunate that WVDL is on the UW–Madison campus, where continued growth and improvement are part of the mindset, and resources are readily available to employees, such as classes and access to expertise, from infectious disease to animal health.

This is a two-way street, says Markel: “I think it’s best for SVM as well as for WVDL to have a really strong partnership, not only in how we interact with each other, but also in how we serve the citizens of Wisconsin.”

Poulsen actually holds several degrees from UW–Madison, including the SVM. He grew up in Waunakee, and today, his parents live within sight of ABS Global, a leading bovine genetics company, located in DeForest. He first attended UW–Madison as an undergraduate, majoring in biochemistry.

“I came to the university because I wanted to be in the marching band and when I got here I said I wanted to be biochemistry major,” Poulsen explains. “But my advisor said I couldn’t do both, so either pick a different major or don’t play in the band. I went with the major.”

He went on to earn his veterinary medical degree from the SVM in 2004 and after graduation, interned at North Carolina State University. He returned to UW–Madison for his residency and earned a Ph.D. in comparative biomedical sciences in 2012. Poulsen then took a faculty job in large animal medicine at Oregon State University before joining WVDL, where he has also served as the organization’s diagnostic case and outreach coordinator.

“What’s really impressed me and the (WVDL) board was seeing him grow in that position over the last the years or so and mature in how he led the service, especially one targeted on interfacing with customers around the state with bull studs, and with other players, including DATCP (the Wisconsin Department of Agriculture, Trade and Consumer Protection),” says Markel.

As WVDL’s director, Poulsen will continue to provide appropriate support to the animal production industry in Wisconsin; will continually work on process development, investment in research and staying “on top of the curve;” and work to broaden outreach to state industry leaders and elected officials in Wisconsin and nationally.

“We want to continue growing our relationship with the state legislature and the agricultural industry to make sure they know us as a resource,” Poulsen says. “That means meeting with the (Wisconsin) Farm Bureau and elected officials on agricultural committees to explain what WVDL is and let them know that if there are problems like highly pathogenic avian influenza, or foot and mouth disease, or canine influenza, they know that we are a resource on campus and they can come get us, or we can come to their offices.”

Poulsen says he didn’t necessarily seek out leadership, but working with the teams at WVDL lit the spark.

“I learned it’s not all intuitive but it’s a learned-trait, like surgery,” he says. “That led me to the director’s role.”