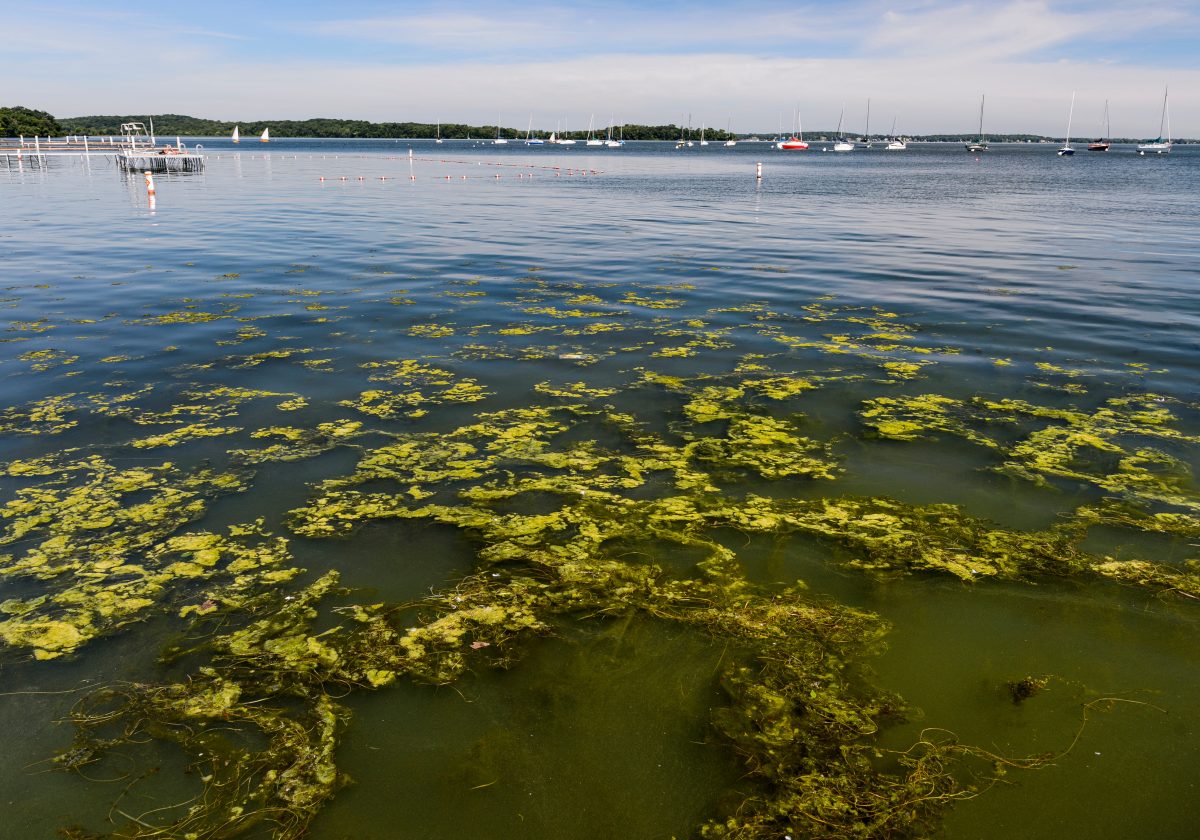 Algae blooms form on the surface of Lake Mendota near the Memorial Union Terrace at the University of Wisconsin-Madison during hot summer weather on July 3, 2018. Photo by Jeff Miller / UW-Madison

In October, Evers established the Governor’s Task Force on Climate Change in an effort to better understand the impacts of climate change on Wisconsin.

Chaired by Lt. Gov. Mandela Barnes, the task force brings together state agencies and legislators, tribes, business leaders, and economic and conservation organizations from across the state — including WICCI, which is led by the UW–Madison Nelson Institute for Environmental Studies and the Wisconsin Department of Natural Resources (DNR).

WICCI was created in 2007 to produce and share information that can limit vulnerability to climate change in Wisconsin and the Upper Midwest. That trove of impartial scientific data and research will be available to task force members, who have asked WICCI to focus on updating and reissuing its 2011 climate assessment report, Wisconsin’s Changing Climate.

“We are so pleased the state is taking climate change seriously and including science as a part of its task force,” says Steve Vavrus, co-director of the initiative and a senior scientist at the Nelson Institute’s Center for Climatic Research. “We are thrilled to see our scientific findings utilized to guide policy. Our contribution to the task force will provide us with a great opportunity to strengthen our relationships with state agencies.”

WICCI hopes to explore topics such as how climate change affects infrastructure, the Great Lakes, tourism and tribal nations. It also plans to expand research and outreach efforts, add new groups to research and reorganize its working groups — which include members from state and federal agencies, UW System schools, tribal organizations, businesses and nonprofit organizations.

“We have developed several working groups and new projects to explore climate change further and update our previous reports,” says Vavrus. “We are excited to revive WICCI as we have a lot of potential and have been charged to do a lot.”

As a part of this revival, the initiative will update its website, adding to climate change resources, and look for other ways to engage with citizens, private and public decision-makers, and scientists through a collaborative network. Overall, WICCI hopes to serve as a catalyst for improved scientific understanding of climate impacts while enabling better planning, investment and adaptation as it relates to climate change.

“Climate change is one of the defining issues of our time and we are grateful to the leadership from Gov. Evers,” says Pam Porter, a WICCI co-chair and policy advisor to DNR Secretary Preston Cole. “We look forward to updating the 2011 WICCI report, and providing the best science to assist decision makers. As Secretary Cole said, ‘Now is the time, not tomorrow.’”