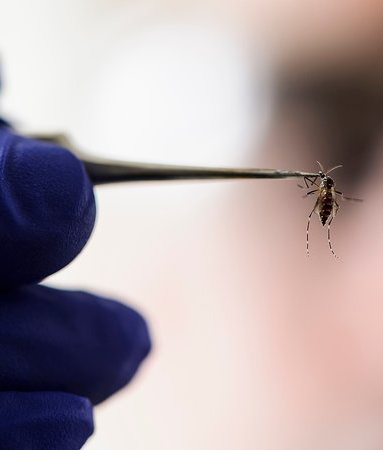 It’s no accident that researchers at the University of Wisconsin-Madison have taken a lead role addressing the Zika virus epidemic gripping the Americas. Many of them were already at work fighting viruses and mosquito-borne diseases in Central and South America.

Adding expertise in obstetrics, virology, radiology and public health from UW-Madison’s rare breadth of scientific expertise, the researchers are now working to screen mosquitoes for the ability to carry Zika virus and infect humans, and to use a harmless bacterium to block mosquito transmission of the virus. They are studying Zika infection in monkeys to describe the progression of infection and its dire consequences in pregnancy. And they’re sharing their findings with public health officials and scientists around the world to speed our path to the best vaccines, treatments and strategies to arrest Zika’s spread.

GHI provided core funding for a biosafety level 3 insect laboratory in the Robert P. Hanson Laboratories of the School of Veterinary Medicine that is essential to the Zika work. “Even though Zika had not yet emerged, GHI was aware of the threat of mosquito-borne viruses, due to related viruses such as dengue and chikungunya,” says GHI Associate Director of Research Tony Goldberg. “No one predicted the emergence of Zika virus in particular, but GHI predicted the need for state-of-the-art research facilities for new arthropod-borne diseases.  Thanks to the research environment at UW-Madison and the contributions of campus units like GHI and the School of Veterinary Medicine, we were ready.”