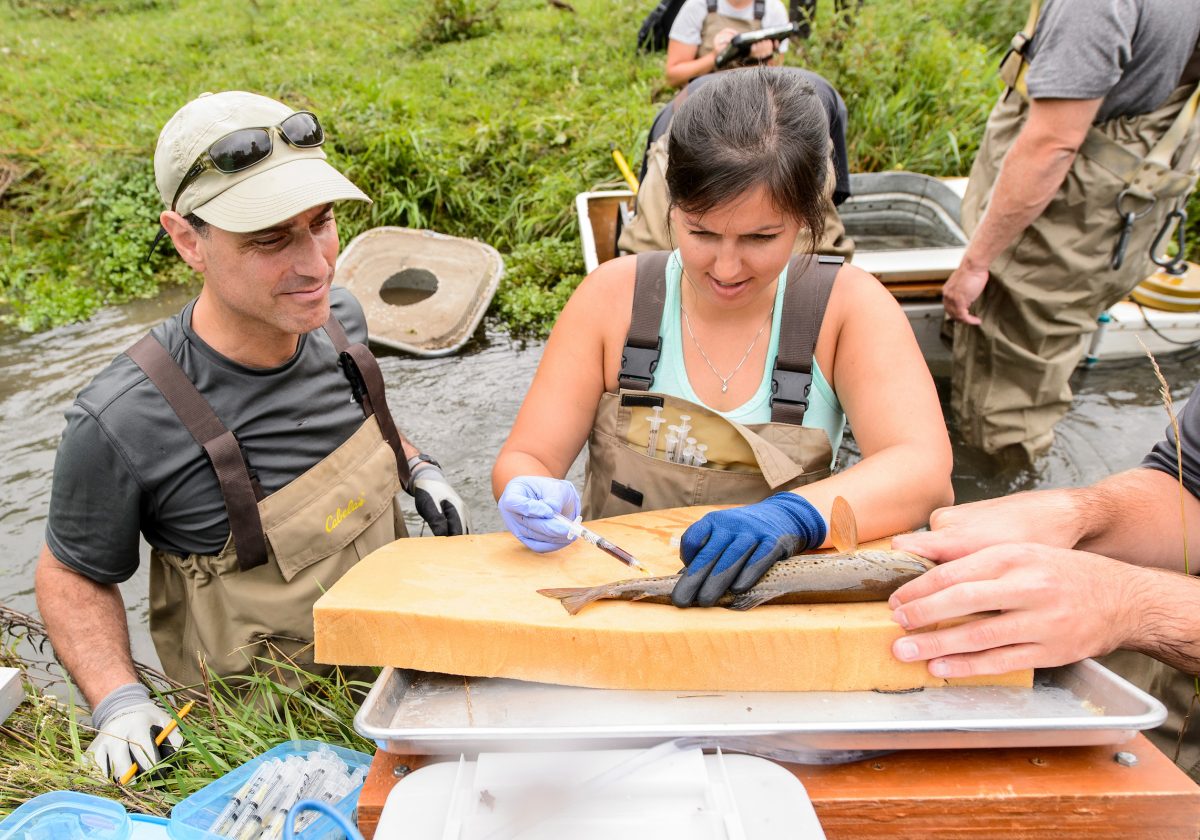 Tony Goldberg, left, is co-director of the New Global Virus Network Center of Excellence at UW-Madison. His research includes working with the Wisconsin Department of Natural Resources to test for emerging diseases in fish. Photo by Bryce Richter, UW-Madison.

The U.S. Food and Drug Administration’s Office of Vaccine Research and Review and the Russian Federation’s Smorodintsev Research Institute of Influenza were also named to join GVN’s network of 48 Centers of Excellence and seven Affiliates in 29 countries.

“The addition of these three Centers deepen our viral expertise in basic science, zoonotic and vaccine and drug therapy expertise, among other advantages,” Gallo said in a press release. “UW-Madison is an impressive institution with a number of top virologists who will contribute to the GVN’s overall research and translational programs and global reach.”

“GVN is an international consortium of Centers for Excellence in virology,” says GHI Associate Director Tony Goldberg, who co-directs the new center with virologist Yoshi Kawaoka, a member of the GHI Advisory Committee. “UW-Madison’s historical and current preeminence in virology make us a natural fit for GVN,” Goldberg says.

Goldberg and Kawaoka are professors in the School of Veterinary Medicine Department of Pathobiological Sciences. Kawaoka also directs the Influenza Research Institute. The new center also includes representatives from across campus (see list below) that showcases the deep diversity of virus research at UW-Madison.

GHI will serve as the contact unit for the new GVN Center. “GHI’s position as an umbrella unit across campus makes it ideally suited to coordinate this effort and to join GVN’s efforts to respond rapidly to global viral threats,” Goldberg says.

GVN notes that virology research at UW-Madison includes studies of agents infecting humans, animals and plants, including highly pathogenic viruses such as the Ebola virus and viruses with pandemic potential such as Influenza, Dengue and Zika. UW-Madison is strong with respect to viruses that cause human cancer and the biochemistry of host-virus interaction.

The three new GVN Centers’ activities range from basic research to the development of vaccines and therapeutics to public health and policy, according to the press release. UW-Madison has specific strengths in emerging viral pathogens and zoonoses, including rapid detection and characterization of novel viral agents, the development of animal models (especially primates) and the development of countermeasures such as vaccines and therapeutics. The Center will work close with colleagues at the Colombia-Wisconsin One-Health Consortium, also a GVN Center of Excellence, led by Jorge Osorio, a UW professor of pathobiological sciences.

“With our new GVN membership, and in partnership with Dr. Osorio, we will expand the range of global training opportunities for our graduate students as well as provide the GVN with expertise in diverse viral systems of global importance and highly specialized methodologies,” Goldberg and Kawaoka say. “We especially look forward to strengthening our international training opportunities and forging new scientific collaborations with members of the GVN.”

Several other virologists at UW-Madison are GVN contacts for their respective units and showcase the deep diversity of virus research on campus: