Citizen scientists are helping fill a gap for Wisconsin.

“today in creepy things: found a dead crow in the garden. the other crows are mourning/freaking out w/cawing”

With Tweets like these, ordinary citizens are helping fill a gap to help scientists better understand wildlife health in Wisconsin.

By collecting information from sources as varied as Tweets and news stories to citizen scientist observations and more rigorously collected government data, the Wildlife Data Integration Network (WDIN) is creating a more complete and immediate picture of wildlife health that could signal the early stages of emerging, significant threats to human and animal health.

Traditional government reports often focus only on federal or state lands and certain species, providing an in-depth look at only part of the wildlife disease puzzle, said Megan Hines, technical manager for WDIN at the University of Wisconsin-Madison School of Veterinary Medicine. The reports are often only released quarterly and not in formats that meet the needs of most researchers.

“We’re trying to cast a broader net and increase the speed at which this information can be accessed,” Hines said. 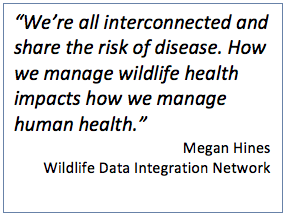 WDIN’s “Emerging Disease Detection through Novel Wildlife Health Information Channels” was among eight projects that received one of the Global Health Institute’s inaugural seed grants in 2011. The grants encourage interdisciplinary, multi-faceted approaches to tackle the root problems of human health. WDIN’s collaborators come from UW’s Department of Computer Sciences, the Nelson Institute for Environmental Studies, Life Sciences Communication and the School of Veterinary Medicine and the US Geological Survey National Wildlife Health Center.

The grant allowed WDIN to expand its outreach to more fully engage and retain citizen scientists through the Wildlife Health Event Reporter (WHER). WDIN worked with computer science professor Xiaojin Zhu and graduate student Junming Su to monitor Twitter for mentions of wildlife health events, and they hope to refine and expand the process to other social media sites and information sources.

WDIN embraces the concept of “one health” that includes the well being of animals and humans. There are many close connections between animals and humans, and disease transmission is an important component of these interactions, Victoria Szewczyk, WDIN administrative manager, said, citing several examples:

“It’s very easy for these viruses to move from one critter to another, including us,” Szewczyk said. WDIN is collecting and sharing this data in the effort to protect the health of all.

While they recognize citizen reports will over- and under-report some species, cross-referencing observations with other more rigorously collected data and monitoring reports can help establish a baseline of normal dead-animal activity, so scientists can identify abnormal patterns in the future, Hines said. A group on the East Coast, for example, observed a large uptick in dead seabirds but couldn’t define the extent of the problem.  Tufts University and their coastal partners agreed to post sightings to WHER to capture the observations in a central location. Reporting data from across a variety of channels will help scientists understand what is happening now and predict what could happen in terms of animal and human disease, Szewczyk said, WDIN data will allow scientists to anticipate and prepare for an emergency.

Beginning in 2006, WDIN began disseminating news stories about wildlife disease regularly through the Wildlife Disease News Digest. By incorporating Tweets, news stories, official reports,  and citizen observations  into the web-based data system, WDIN is committed to creating a free, public, easily accessible wildlife health dataset for researchers and organizations to use, Hines said.  In the future, the WDIN group aims to create an open access ‘Wildlife Health Atlas’ to explore and review reports from all channels.