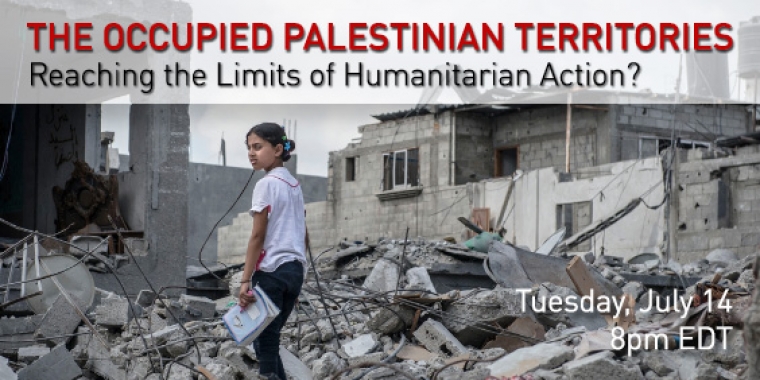 On Tuesday, July 14, Doctors Without Borders will acknowledge the one year mark following the war in Gaza through an investigative webcast discussing the possible plateau of humanitarian action in the Occupied Palestinian Territories derived from prolonged residency in inhumane environmental conditions.

Two experienced MSF field workers – nurse Sarah Woznick, who worked in Gaza before, during, and after last year’s conflict; and Dr. Greg Keane who coordinates our mental health programs in the West Bank – join MSF-USA executive director Jason Cone, who has recently visited both the West Bank and Gaza, to reflect on the nature and the causes of the medical needs they see in their programs.

Sarah Woznick earned her nursing degree at Johns Hopkins University School of Nursing and has been working as an Intensive Care nurse in Denver, Colorado for six years. Sarah did her first MSF mission in Gaza from January to July 2014, providing bedside ICU (Intensive Care Unit) training to nurses in Nasser hospital in the south of the Gaza strip. When Operation Protective Edge began in July, she briefly extended her mission and served as the focal point for MSF’s post-operative clinical operations. Sarah returned for a second Gaza mission in 2015 as part of the team implementing a standardized ICU training for over 100 nurses from all the major hospitals in the Gaza strip.

Dr. Greg Keane is interested in the mental health of at-risk populations, working clinically with asylum seekers, refugees, the homeless, IV drug users, and people with severe mental health disorders.  He has worked with indigenous populations, including with Aboriginal and Torres Strait Islander communities in northern Australia, as well as in urban areas.  After completing a Master of Public Health at Harvard, Greg worked as a clinical psychiatrist with Doctors Without Borders in Kurdistan, where he established a mental health program for Syrian refugees.  Greg currently manages mental health program in the West Bank for MSF.

Jason Cone is the executive director of MSF-USA, and recently spent time in several of MSF’s projects in the Middle East, including those in Gaza and the West Bank.

Phil Zabriskie, moderator, is the editorial director for MSF-USA and has reported for Time magazine on Gaza, the West Bank, and elsewhere in the Middle East.

Please join this captivating discussion on the efforts done by MSF to easy physical and mental distress of these traumatized populations via the live chat feature on Livestream during the broadcast.

For more information visit their site.