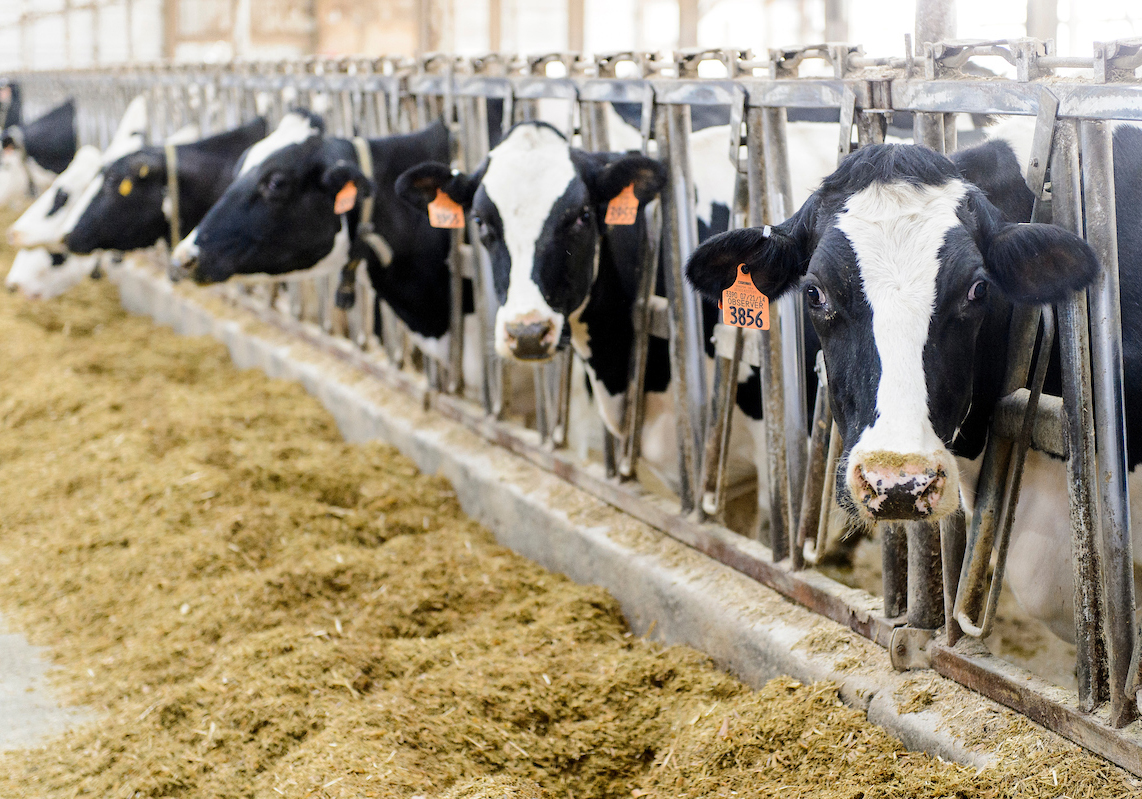 Dairy cows are pictured on UW alum Mitch Bruenig's farm near Roxbury, Wisconsin during a visit by Heather White, assistant professor of dairy science at the University of Wisconsin-Madison, on March 21, 2017. White and her students are looking for ways to detect ketosis in dairy cows. Photo by Bryce Richter / UW-Madison

The $10 million Dairy Coordinated Agricultural Project, or Dairy CAP, set out in 2013 to assess the greenhouse gas contributions of the dairy industry and help farmers meet the industry’s goal to cut emissions 25 percent by 2020.

The project’s recommendations center on efficiency. Researchers found that a combination of ideal cow genetics, improved feeding strategies and better manure management could allow dairy farms to cut emissions by a third to almost half, while producing more milk with less feed.

University of Wisconsin–Madison professors Matt Ruark and Molly Jahn led the Dairy CAP in collaboration with seven other universities; the U.S. Department of Agriculture, which funded the project; and the Innovation Center for U.S. Dairy, an industry research group. The team issued its final report earlier this year.

“I think there’s three big takeaways,” says Ruark, a professor of soil science. “One, efficiency in milk production leads to reduction in greenhouse gas emissions. Two, reductions in greenhouse gases can be achieved along with reductions in nutrient loss and increases in economic returns. And three, that dairy-based cropping systems can be adaptive to climate change.”

Milk production primarily leads to greenhouse gas emissions through the methane produced in cows’ rumens, during manure storage and spreading, and in association with growing crops for feed.

Methane is an inevitable byproduct of ruminant digestion and it’s concerning because it’s 25 times stronger than carbon dioxide at trapping heat in the atmosphere. Nitrous oxide from manure and fertilizer is 10 times more potent than methane.

The Dairy CAP team tracked emissions at each of these stages. Experimental modifications were followed throughout their entire life cycles to identify how, for example, feed changes affected not just the production of milk and methane but manure emissions and the growth of crops fertilized with that manure.

Experiments were conducted at the UW–Madison Dairy Cattle Center, the Arlington Research Station, the USDA Dairy Forage Research Center in Prairie du Sac, Wisconsin, and at partner institutions. The experiments helped refine feed-to-manure computer models of emissions and economic returns for both 150- and 1,500-cow dairy farms.

The benefits from breeding cows for efficient milk production and using the best feed practices, manure handling and cropping systems added up quickly.

One of the most effective ways to cut emissions is to use an anaerobic digester to convert the methane from stored manure into carbon dioxide, since it is less potent. While this is an expensive solution, the costs could be partly offset by generating and selling electricity from burning the methane or converting it to compressed natural gas to fuel cars and trucks.

Yet, changing practices to cut emissions could be a tough sell while farmers continue to struggle through a years-long slump in milk prices, says UW–Madison professor Mark Stephenson. An expert in dairy economics, Stephenson evaluated alternative manure management for the Dairy CAP. Low milk prices have helped push 800 Wisconsin dairy farms to close in the year since August 2018.

“One of the legs of sustainability is economic. Just because you want to reduce greenhouse gases doesn’t mean that you can afford to employ the best practices,” says Stephenson. “The efficiency gains are key to the adoption.”

That efficiency stems from improving the conversion of feed into milk through feeding practices and dairy cow genetics, which can reduce both costs and emissions. Researchers also assembled recommendations to help farmers adapt to a warming climate, such as ways to predict the ventilation needed in a barn to keep cows cool and productive.

The project’s findings have been distributed by the Division of Extension and on the Virtual Farm website hosted by Pennsylvania State University. The site demonstrates the typical operations of both large and small dairy farms and ways they can reduce their impact on the environment.

“The Dairy CAP was a really exciting opportunity to work cooperatively with about 100 scientists all over the country,” says Carolyn Betz, the project manager and author of the final report.

She recognizes that the challenges facing dairy farmers today may make it hard to quickly adopt new management practices. But Betz sees opportunity as farms inevitably update their operations over time.