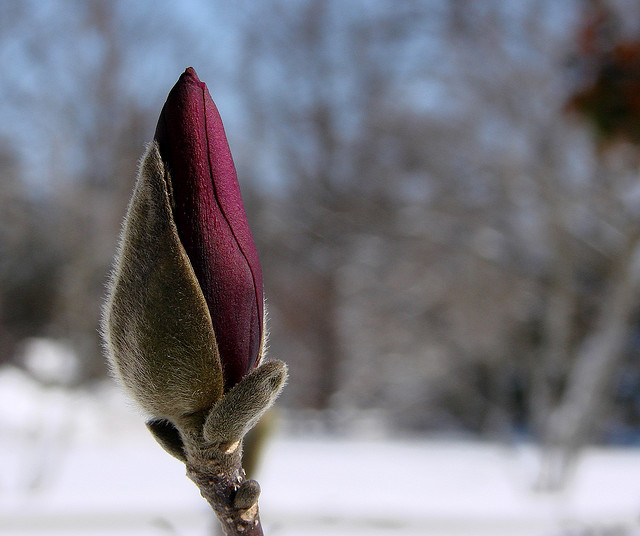 This story appeared originally in the Earth Island Journal.

Onset of spring plant growth will shift by an average of 21 days over the next century, new research shows

If winter comes… spring’s going to be closer-than-usual behind. New research shows that as a result of rising temperatures caused by global climate change, the first leaves and buds of spring will begin arriving at least three weeks ahead of time in the United States.

Researchers at the University of Wisconsin-Madison examined the variations and trends in the onset of spring across the Northern Hemisphere’s temperate regions and calculated that the onset of spring plant growth will shift by a median of three weeks earlier over the next century. Their findings were published in the journal Environmental Research Letters yesterday.

The prospect of shorter winters probably seem like great news for those who have suffered through several long and freezing cold spells recently, but it’s definitely bad tidings for many spring season plants and for animals that rely on them for sustenance. The change will have far-reaching impact on the growing season of plants and could, as a result, affect for our food security as well.

In the natural world, plants and animas life cycles are adapted to the seasons and resource availability. For instance, some migratory birds cope with winter conditions, when food is scarce, by migrating to a warmer climate. Others, like bears and squirrels, do the same by hibernating. Both migration and hibernation are sensitive to seasonal changes. So when the climate goes out of whack — or as scientists would say, when there’s a “phonological mismatch”  — it means trouble. (There have already been reports about warmer weather driving bears out of hibernation early this year.)

“Our projections show that winter will be shorter — which sound great for those of us in Wisconsin,” Andrew Allstadt, one of the authors of the study and a postdoctoral research associate in the Department of Forest and Wildlife Ecology, said in a statement. “But long distance migratory birds, for example, time their migration based on day length in their winter range. They may arrive in their breeding ground to find that the plant resources that they require are already gone.”

The researchers observed that the Pacific Northwest and Mountainous regions of the western US would see the biggest shift — they estimate spring will arrive nearly a month early in these regions by 2100. The shift will be the smallest in the southern regions, where spring already arrives early,

The researchers also predicted that there would be fewer “false springs” — when freezing temperatures return unexpectedly after spring plant growth has begun — across most of the country, except in certain parts of the western Great Plains, which is projected to see an increase this particular weather phenomena.

“This is important as false springs can damage plant production cycles in natural and agricultural systems” Allstadt said. “In some cases, an entire crop can be lost.”

The researchers now plant to expand their inquiry to extreme weather events such as droughts and heat waves. “We are particularly interested in how these affect bird populations in wildlife refuges,” Allstadt said.