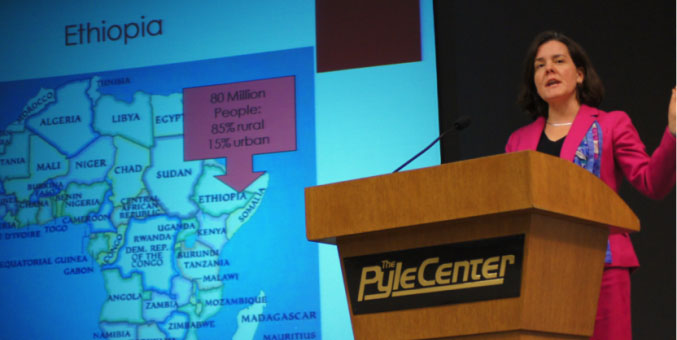 With a new five-year, $500,000 grant, Lori DiPrete Brown, an associate director at the University of Wisconsin-Madison Global Health Institute, will work with Twinning Programs in Africa to improve the quality of health care in low resource settings.

DiPrete Brown, a pioneer in improving health systems around the world, and local health care providers, will collaborate with the American International Health Alliance to build an African hub for quality improvement (QI). The hub will expand access to care by training more health care providers and supporting efforts to strengthen how health and social services, from primary care to emergency services to care for orphans and vulnerable children, are delivered. Prevention and treatment of HIV and its impacts will be a major focus of the program. 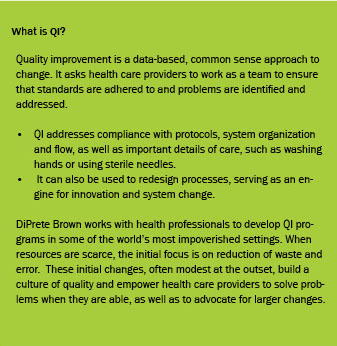 The grant offers an opportunity to engage a broad range of UW health experts and should lead to dramatic changes in quality at partner sites, DiPrete Brown says. The collaborative approach, grounded in a comparative systems perspective, fosters two-way learning. DiPrete Brown hopes that shared work with African leaders will lead to innovations and improvement in health care for Wisconsin residents as well.

The effort is funded by the U.S. Department of Health and Human Services and allows AIHA to strengthen and expand its Twinning Program in support of the President’s Emergency Plan for AIDS Relief. The twinning model uses institution-to-institution partnerships and peer-to-peer relationships to benefit both sides. AIHA has established 51 twinning partnerships since 2004.

“During the next five years, our goal is to create the requisite capacity to manage twinning projects locally,” says AIHA Executive Director James P. Smith. “This represents the ultimate outcome we hope to achieve through all our twinning partnerships – that they have attained and can sustain a level of institutional and human resource capacity that enables them to respond effectively to the health needs the communities they serve.” The Global Health Institute is considered a key strategic partner to provide technical assistance for the effort.

The latest grant builds on DiPrete Brown’s 23 years of pioneering international experience with QI. Improving quality can be as mundane as filling out forms properly or scrubbing the bathtub, DiPrete Brown says. But knowing how to make meaningful change, even when a staff has few resources and too many patients, positions these leaders to be more effective advocates for broader improvement. QI also changes the organizational culture to one where quality matters and commitment to it is a core value.

QI has dramatically improved health outcomes in Africa. For example, because of QI efforts, new mothers in rural Niger hospitals are less likely to suffer post-partum hemorrhaging, the number one cause of maternal deaths there. With QI, compliance with infection control protocols at Black Lion Hospital in Ethiopia jumped from 30 percent to more than 80 percent as staff established routines for tasks such as managing trash, using sterile needles, washing hands and using gloves. “An Ethiopian orderly told me, ‘I’m going to make sure to wash my hands even if the person I’m helping is dirtier than I am,'” DiPrete Brown remembers. “That spoke volumes about what it means to internalize quality improvement as a value system. Am I a quality person? That means competence and compassions. It’s all about quality.”

Introducing a new way of thinking

“I personally call her the mother of QI in Ethiopia,” says Ephrem Aboneh, who worked with DiPrete Brown at Black Lion and is now a graduate student in the UW-Madison School of Pharmacy. DiPrete Brown’s big contribution was sensitizing hospital staff to the need to improve the system and introducing a scientific way to do it, he says. The holistic, systems approach was a new way of thinking that helped staff see the big picture and understand that doing things little by little could make appreciable change. “People were very excited,” Aboneh adds.

DiPrete Brown’s work began in the emergency department and has become a model for Black Lion. “I love the problem solving and the kind of engaged learning QI allows me to do,” she says. “People respond, feel empowered and are motivated to give it a try.”

Coming from industry, QI filtered into American health care in the 1990s. “People laughed at the idea of QI in developing countries,” says Jim Heiby, medical officer with the Global Health Bureau at the U.S. Agency for International Development (USAID).

DiPrete Brown, Heiby and other QI pioneers proved the critics wrong. DiPrete Brown was lead author on the first monograph that gave developing countries a QI roadmap what works best.”She was there for the transition of adapting QI used in the United States to countries that had much less money to spend but had similar problems,” Heiby says. The early monograph continues to be used throughout the world. “The difference is, no one laughs now,” Heiby says.

Beverly Nyberg, a senior technical advisor for Orphans and Vulnerable Children in the Office of the Global AIDS Coordinator at the U.S. Department of State, looked to DiPrete Brown in 2006 for a QI perspective to help children affected by the African AIDS crisis. “That was a kickoff of really helping countries think about quality assurance in these areas,” says Nyberg, who now works for the Peace Corps Office of Global Health and HIB. The successful QI effort continues to expand, and Nyberg and DiPrete Brown are still collaborators on related work for the Peace Corps.

DiPrete Brown’s desire to respond to human suffering is rooted in the images she grew up with in the 1960s, such as civil war in Bangladesh, famine in Biafra and war in Vietnam. Catholic school connected her to a spirituality that addressed suffering, and a stint in the Peace Corps working with Honduran teenagers cemented her interested in public health.

Her work evolved from operations research that carefully studies systems, to a QI approach that works with people instead of for them and finds ways to make and sustain changes over time. In the early 1990s, on the heels of a new democratic regime, Chile was ripe ground for QI. Heiby credits DiPrete Brown with successfully thinking through the completely new concept and leading a USAID project that brought QI to Chilean health care.

“This was during the first year of democracy in Chile, and QI is a very democratic approach to management,” DiPrete Brown says. QI looks to front-line workers to identify problems and how to improve processes. It also respects local knowledge instead of relying on outside expertise.

“QI helps us to question things. It can be subversive in the way true democracy is subversive, and it’s very linked to human rights,” DiPrete Brown says. “The question is how do we get away from hierarchies and other barriers to collaboration, yet still have clear roles and a safe chain of command for health systems? There are times you need to do what you’re told. There are times when you need to ask very challenging questions. QI values different kinds of knowledge and plural voices. You need to balance those.”

As she trains QI leaders, Brown tells them leadership is about being able to convey the hope that change is possible. “If people think quality is possible, it gets done,” she says. “I also tell leaders it’s not their job to prove to people they’re smarter than everyone else. The question is, ‘Can people trust you?’ ‘If they think they have a relationship with you and they can come to you, a lot more is possible.

DiPrete Brown leads the QI component of the UW-Madison/Ethiopian Twinning Partnership, and organizes a summer QI Institute at UW-Madison for representatives from developing countries. She has trained more than 100 national leaders through workshops in Ethiopia, Zambia, and South Africa. The fourth Annual QI Leadership Institute, Oct. 12-19, 2014, will engage leaders from six countries, along with leaders who work in low resource settings in Wisconsin.

The Global Health Institute (GHI), supported by public and private funds, is dedicated to improving health today and tomorrow by addressing the multi-layered causes of disease. GHI fosters collaborations that strengthen health care and health systems and encourage the sustainable use of global resources, restore and conserve the ecosystem and address and reverse the causes of climate change. For more information or to learn how you can become part of the GHI community, visit ghi.wisc.edu.