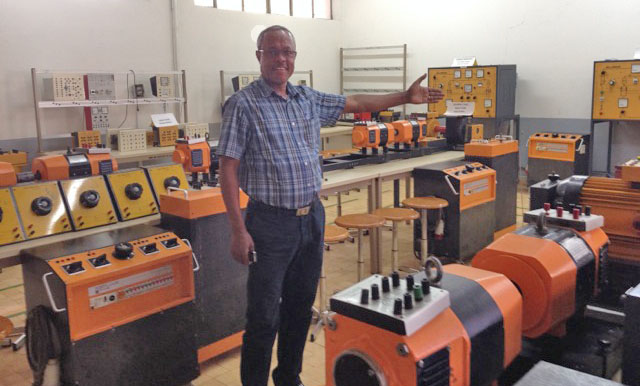 Belachew Gessesse from Bahir Dar University is visiting UW-Madison to develop a blueprint for a laboratory-scale microgrid. He's shown here in a Bahir Dar training room. (Photo by Jonathan Patz.)

Women and children will benefit first from a University of Wisconsin-Madison/Bahir Dar University project to bring electricity to remote Ethiopian villages.

Instead of trying to connect widely dispersed villages to a national electrical grid, Gessesse and Giri Venkataramanan, a UW-Madison professor of electrical and computer engineering and an advisory associate for the Global Health Institute (GHI), look toward developing microgrids, or stand-alone, small-scale electric networks to generate, store and distribute electricity to individual or groups of villages.

Their project, “Development of a Microgrid Research Center in Ethiopia to Support USAID’s Power Africa Program,” will establish a microgrid research cluster, centered at Bahir Dar University, with capacity for research, testing, education, technology transfer and a field test site. It is funded by the Partnerships for Enhanced Engagement in Research Science program of the U.S. Agency for International Development (USAID) and managed by the U.S. National Academies of Science. UW-Madison’s Global Health Institute, Office of Sustainability and Wisconsin Energy Institute also support the project.

Gessesse is in Madison for eight weeks this summer, collaborating with Venkataramanan to develop a blueprint for a laboratory-scale microgrid that will be built at Bahir Dar University. The program is vital for Ethiopia, considered one of the world’s five fastest growing economies, where a vast majority of the people live without electricity.

“The standard of living or quality of life in any country can be measured by the quantity of total electric energy used per capita,” Gessesse says. Seventy million of Ethiopia’s 94 million people live without electricity, and, in rural areas, only 10 percent of homes are electrified. Ethiopians daily per capita electricity use is less than 1 kilowatt hour, or enough to power a 100 watt light bulb for 10 hours. It’s a small fraction of the 35 kilowatt hours the World Bank reports as daily per capita use in the United States.

With 85 percent of Ethiopians living in widely dispersed villages, supplying electricity with a traditional electrification system based on centralized power is not economically or technically feasible. Local microgrid systems that offer a bottom-up electrification paradigm look like a practical solution.

That’s where Venkataramanan comes in. A pioneer in developing small, local electrical networks, he led the hardware development of the laboratory-scale microgrid on campus.

He’s been a principal and co-principal investigator on 10 microgrid projects funded by private industry and the U.S. government. He’s serving as a mentor and technical advisor for this project.

This project complements Power Africa, the Obama Administration’s public-private program to generate 30,000 megawatts of new power on the continent and add 60 million electricity connections. Power Africa supports high-level, big projects, such as wind farms, to power urban areas and industry, and those benefits will not reach remote villages, Venkataramanan says. This project will help fill that gap without the prohibitive expense of running electrical lines to every village.

The United States has a central power grid because Franklin Roosevelt’s Rural Electrification Administration and the 1936 Rural Electrification Act provided the impetus and resources to develop it. If the U.S. started over today, Venkataramanan predicts rural America would be powered by local electrical systems, not an expensive central power network. The value of microgrids became apparent when one New York neighborhood, powered by a local network, kept its lights on in the aftermath of Hurricane Sandy.

“Let’s put this in perspective,” Venkataramanan says. “A little more than 8 million customers lost electricity during Hurricane Sandy along the eastern United States for a period ranging from a few hours to a few days. Worldwide, we have 1.2 billion people with no access to electricity year-round.”

Venkataramanan hopes to develop a “plug-and-play” microgrid system that will store and distribute energy from a variety of sources, including wind and solar. These fuels run generators that could be connected into a network to provide local electricity. With a local system, a village could add more generators as it grows.

Being able to use a variety of renewable energies is essential in Ethiopia, which is committed to reducing its carbon emissions by two-thirds within the next 15 years. Although the available power will fluctuate, using solar, wind and hydropower will also provide higher levels of resilience in the face of climate change, Gessessee says.

“There is a consciousness about the effect of carbon emission,” he adds. “As we are developing, we are looking to develop clean energy.”

Ethiopia has significant renewable resources in wind, solar and hydropower. For his doctoral research, Gessesse studied how systems behave when large amounts of wind power are interconnected, considering especially how much wind power could be connected to the existing central grid and where it should be connected. His work was based on the 120-megawatt Ashegoda Wind Farm in northern Ethiopia, 448 miles from the capital.

Ethiopia must develop more electrical power, Gessesse says, and large Power Africa projects are only part of the answer. “Can you imagine 70 million people without electricity?” he asks.

Using microgrids to electrify remote communities sparsely scattered across the country would supply modern energy to run motor-operated devises such as flour grinders and water pumps. Communities could develop cottage industries that would increase family incomes. Women would not need to gather wood for fuel, and families could refrigerate food.

With electricity, teachers, students and health care workers would have access to more technology, including computers, the Internet and distance education. Electric water pumps would give villagers access to cleaner water, reducing infections and disease and help communities reach public health goals. And there could be light, not from air-polluting kerosene lanterns, but from electric bulbs.