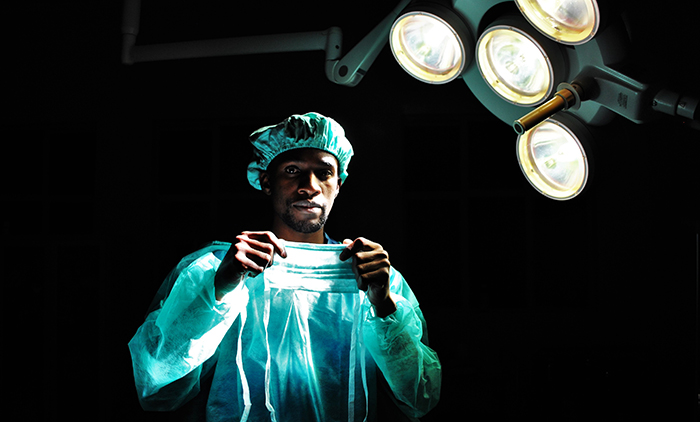 The idea of One Health – that the health of humans, animals and ecosystems are interconnected—presented new ways to address health challenges for the Mandela Washington Fellows visiting the University of Wisconsin-Madison this summer.

For Webby Phiri, a physician from Zambia, connecting environmental and human health gives him a new way to look at trachoma, a disease that can be spread by flies and lead to blindness. “By the time patients get to the medical side, it can be a bit too late,” says Phiri, one of 25 Mandela Washington Fellows representing 20 African countries who are spending 6 weeks at UW-Madison. Establishing strong relationships with environmental health and medicine could be important connections to battle the world’s top cause of preventable blindness.

Omari Mahiza, another Mandela fellow and physician from Tanzania, was delighted to find that One Health connects his two loves: medicine and farming. “One Health brings together agriculture, medicine and animal health, something I was wishing for for a long time,” says the 33-year-old father of two who is a pediatrician and hospital administrator and also raises chickens, grows garden vegetables and has a 7-acre farm where he harvests coconuts, mangoes and oranges.

“One Health brings together agriculture, medicine and animal health, something I was wishing for for a long time.”—Omari Mahiza, M.D., Tanzania

The Washington Mandela fellows visit to Madison is part of the flagship program of the Young African Leaders Initiative begun by the U.S. government in 2014. This year almost 1,000 Africans between 25 and 35-years-old were selected to study at 38 host universities for academic coursework, leadership training and networking. The UW-Madison fellows are following a public management and leadership track, and the Global Health Institute (GHI) is among the campus groups that organized academic programs for them.

“The major public health challenges we all face demand bringing multiple disciplines together to solve problems,” says Olsen, a professor emeritus in the School of Veterinary Medicine. One Health is important to address complex challenges including zoonotic diseases that can jump from animals to humans, climate change and health and securely feeding the world.

For Conway, a pediatric infectious disease specialist, One Health broadens the health conversation to include more than doctors and nurses. “It’s much more interesting and productive to talk to leaders from a broad array of disciplines, and to help them understand that every decision and policy can impact health,” he says. “We are trying to impress on all our UW students and collaborators across the globe that health should be considered in all  policies: to shape a conversations where everybody talks about the same thing—wellness.”

Poulsen and Klos showed how connecting animal and human health made a difference for Wisconsinites when antibiotic resistant Salmonella surfaced in human and animal populations.

As is often the case, a conversation among colleagues led to action. The way Poulsen tells it, a group at the Veterinary Diagnostic Lab began talking about a series of unusual cases of highly disease-causing salmonellosis. Calves were dying. The poultry expert said he was seeing the same serotype regularly but it was not as serious in poultry flocks. A microbiologist suggested it was time to talk to their counterparts in human health.

Klos had seen an outbreak in people, notifying the Department of Agriculture, Trade and Consumer Protection (DATCP) and the Centers for Disease Control and Prevention. Only one human antibiotic controls the infection, and none help cattle.

Together, the animal and human health experts created a Prevention—Farm to Fork web presence, linking their information. The diagnostic lab, DATCP and UW Extension helped get the word out to the food industry and veterinarians, all with an eye to reduce the number of animals leaving the farm with antibiotic resistance.

Coming from resource-challenged settings, the YALI scholars wondered what to do when families were hungry, only to be told their chickens may be colonized with harmful bacteria and could be unsafe to eat if not handled and cooked properly. “How do you get a veterinarian to where you are?” a YALI scholar asked. “How do you get care to the farms?” they asked.

“I’m sure we get a lot of these diseases,” Mahiza from Tanzania said. “Our biggest problem is testing.”

The conversation reminded Zambia’s Phiri of the beef that’s sold from a stand near his office. Inspectors should be supported more so they can do much more than visual inspections and basic tests, he says. “There are common questions about the beef sold there. Now, we all need to think about the issue more seriously from the perspective of One Health.”

Phiri, 29, heads a small hospital two hours from Zambia’s capital, where he’s in charge of everything to do with health and medicine for 75,000 people. He and his wife are the only physicians at the hospital, and he is also district health director, supervising more than 200 staff members, including those at 17 rural health facilities. By day, he’s in the office. By night, he’s often called for medical emergencies. “You really do everything,” he says. “Surgeries are the hardest. Often, you’re faced with something very dangerous, and you have to deal with it there and then.” He finds time to play with his 10-month-old son first thing after work.

His uncle introduced Phiri to medicine when he left “huge medical books in the house.” The death of his little sister from malaria when she was only 12-years-old continues to inspire him. Phiri looked to the Washington Mandela fellowship to learn new skills. “I have to be a leader,” he says. “I have to make very tough decisions.” He also appreciated how the program encourages community service. He and his brother have been giving back to the community, painting murals on the walls to make the building more welcoming.

Farming and medicine in Tanzania

In Tanzania, being a doctor is a novel profession, and Mahiza knew he wanted to do something like that. “I discovered I really enjoyed taking care of people,” he says. “I never thought of doing anything else.”

Trained as a general practitioner, he’s been working in pediatrics for five years, where he frequently sees respiratory infections, diarrhea and neonatal problems. He’s also the hospital’s clinical services coordinator, in charge of anything to do with patient treatment. “It’s tough to straddle the management line,” he says.

While his heart is in pediatrics, he also realizes managers are in the best position to create change. The Mandela Washington fellowship gives him a chance to learn about management and policy development. His goal: to learn better how to manage with few resources and to combat acute malnutrition. “There is food,” he says. “But young parents don’t know how to feed their kids. How do I educate people? How do I reach communities?”

Malnutrition contributes to almost half of the deaths in Tanzania. “If we can do something about that, we would go a long way toward reducing the number of deaths,” he says.

The YALI fellows leave the UW-Madison July 29, traveling to Washington, D.C. for the Mandela Washington Fellowship Summit from July 30 to August 3 before returning home.

The Global Health Institute works at the intersection of health, equity, and sustainability. We engage with governments, work with non-governmental organizations, and connect with communities and academic partners in Wisconsin and across the globe. GHI also offers  educational programs across the spectrum of learners. By working together, we uncover the roots of health challenges—from food insecurity and a lack of education to burning fossil fuels, violence against women, and the need for vaccines—and take action to alleviate them. To learn more, visit ghi.wisc.edu.