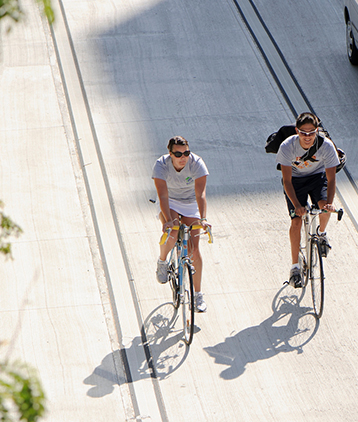 We are a nation that caters to our cars. We build cities with 18-lane highways to accommodate them and erect three-car garages to house them. We take for granted the convenience of jumping into the car—or SUV or mini-van—to run down to the grocery store or drive to work. Usually traveling alone. Rarely considering an alternative, if one exists. Our streets clog, our air quality diminishes, and we face an epidemic of obesity.

But we love our cars. And when we make transportation plans, we want to make it as easy as possible for everyone to arrive on time without the headaches of a traffic jam.

“You need vision to change the transportation system of a place. (This model) gives them evidence to get into that discussion.”—Jason Vargo

In the face of climate change and evidence of increasing ill health from ailments such as obesity, heart disease and diabetes, a trio of scientists at the University of Wisconsin-Madison’s Global Health Institute (GHI)—associate scientist Jason Vargo, public health research fellow Maggie Grabow and statistician and programmer Samuel Younkin—are expanding the transportation conversation. Instead of talking only about level of service, traffic counts, journey time or vehicle flow, they are adding health into the equation—and giving city planners, public health professionals and activists the ability to do the same.

The tool is called ITHIM, the Integrated Transport and Health Impact Model.  “It’s a way for people to talk about how things come together—funding, policies, energy, infrastructure, transportation, housing and health,” Vargo says. “I hope it will lead to more thoughtful urban policy that addresses more issues at the same time.”

By linking diverse sets of data, from transportation behavior to disease risk to air quality to traffic injuries to health outcomes and more, ITHIM provides hard evidence that shows how cities can improve health, save money and reduce greenhouse gases related to climate change when they promote biking and walking. When it’s complete, the model will allow planners to compare plans and determine the benefits of each in terms of fewer deaths, less illness and money saved on health-care. The model will show how to maximize health benefits. It also bridges the gap between health and transportation, giving advocates for each a way to talk together.

“Transportation planning occurs all the time with big impacts on population health, but health is not a consideration in the decision-making process.”—James Woodcock, University of Cambridge

The tool was originally developed at Cambridge University in England and first brought to the United States by the California Department of Public Health. The Wisconsin team is leading the development of an open-source U.S. version of the tool that will be a user-friendly and accessible way to inject health into conversations about transportation infrastructure, investments and policy.

“Transportation planning occurs all the time with big impacts on population health, but health is not a consideration in the decision-making process,” says ITHIM originator James Woodcock, programme lead at the Center for Diet and Activity Research at the University of Cambridge School of Clinical Medicine. He visited Madison recently to work with the GHI team. “ITHIM provides models, tools and evidence to make better decisions about health and improve the conversation.”

For public health planners like Eric Main and Brendon Haggerty in Portland, Oregon, ITHIM, finally, gave them a way to talk about health in the context of transportation planning.

“It’s easy to talk about the health benefits of active transportation like walking and cycling, but in order for people to fully understand the importance, it’s beneficial to see that quantified: number of deaths reduced, years of life-lost reduced,” says Main, an analyst with the Oregon Health Authority. “With numbers, people pay more attention. It makes an even greater impact when there’s a monetization applied to those health benefits.”

ITHIM showed Portland planners that policies and investments to lower greenhouse gas emissions could save up to 133 lives each year. ITHIM is also showing that making walking and biking safe and convenient, and providing incentives to expand the use of travel options will contribute to reducing health care costs by as much as $100 million by 2035.

Active transportation: A benefit for the planet and its people

ITHIM makes a case for moving away from a car-centric mentality. “It is clear that replacing car travel with cycling or walking would benefit our health, as well as our environment,” Younkin says. “Our goal is to support evidence-based policy making by estimating the magnitude of those benefits.”

With ITHIM, for example, Wisconsinites could have shown the health benefits of a program such as Complete Streets—streets designed for the comfort and safety of all users—which was eliminated from the state budget in 2015. “We could say Complete Streets saves x-number of lives, improves health by this amount and reduces air pollution,” says Grabow, who looks for health in all policies. “It would have been great to have the model.”

Locked in a car culture, cities often only think of incremental changes that won’t change health outcomes, Vargo says. “You need vision to change the transportation system of a place. ITHIM gives them evidence to get into that discussion.”