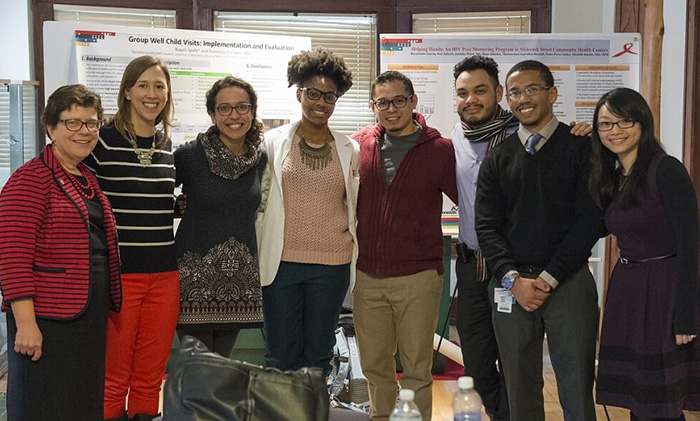 This story was originally featured on the wisc.edu site.

In a central Milwaukee neighborhood landmarked by Jake’s Deli and the Northside YMCA, transformations are taking place.

It’s here that third- and fourth-year University of Wisconsin—Madison medical students enrolled in Training in Urban Medicine and Public Health (TRIUMPH) are undergoing their own transformations. The neighborhood is their classroom, and their efforts target broad public health goals: promote health equity, reduce infant mortality and gun violence, increase nutrition and exercise, increase immunization rates, and prepare for careers as community-engaged physicians.

TRIUMPH is the urban counterpart to the Wisconsin Academy for Rural Medicine (WARM). Both programs place medical students in medically underserved communities outside of Madison to address health challenges. For student Chrissy Ripp, the TRIUMPH program means working in a predominantly Latino neighborhood on Milwaukee’s south side where rising obesity rates and lack of exercise are issues of concern for schoolchildren.

Presenting her project at Walnut Way recently to UW–Madison Chancellor Rebecca Blank, Ripp said that by reaching out to neighborhood groups and other organizations, such as the Wisconsin Bike Fed, they were able to launch a two-week summer bike camp to teach school-age children and their families safe ways to use bicycles for transportation.  Other TRIUMPH students presented a range of projects that reach into the community. Ripp said the experience was unlike any previous part of her medical education. Her fellow students echoed the theme that what they were learning in TRIUMPH could not happen in a classroom.

It’s a question that the medical community is watching closely. TRIUMPH partners, such as Aurora Health Care in Milwaukee, are contributing to the efforts and watching the effects of projects that aim to address the root causes of health problems.

“The future of health care is in promoting health and not just treating diseases.”

“This is the future of medicine,” said Andrew Anderson, executive vice president and chief medical officer at Aurora’s Milwaukee Academic Campus. “The future of health care is in promoting health and not just treating diseases.”

The Milwaukee Health Department, a national leader for its collaborations with research universities, works with TRIUMPH students to build healthy communities.

“Graduates come out of TRIUMPH knowing not just about medicine, but about health,” said Geof Swain, medical director of the Milwaukee Heath Department.

Cynthia Haq, professor of family medicine at the School of Medicine and Public Health, who founded and directs TRIUMPH, said the program has enrolled more than 100 students, including more than 60 graduates. Haq, a special advisor to the Global Health Institute (GHI), also was the founding director of the Center for Global Health. GHI’s predecessor.

All TRIUMPH graduates have entered residencies serving urban, medically underserved populations and they have been more likely to choose primary care careers and to train and practice in Wisconsin.  Several are practicing in Milwaukee after completing their postgraduate training.

At Walnut Way, they work under the principle that “Caring Neighbors Make Good Communities.”  The number of caring neighbors that have emerged is striking — TRIUMPH has worked with 26 Milwaukee community partners, including schools, pubic health and neighborhood organizations. The program also draws support directly from neighborhood activists and those who live where the students work. Haq says one of the strengths of the program is that the students are embedded within local organizations, they get to know local residents outside of clinical settings, and they learn to appreciate the resilience and challenges faced by the people they serve.

One example of a neighbor who teaches TRIUMPH students is Andre Lee Ellis, who came to Walnut Way on Jan. 15 for the chancellor’s visit. Ellis founded an organization called “We Got This” that puts youths to work in the gardens and in the neighborhoods. He said he founded his organization on the fly to intervene for a young man who was in trouble with the police. Law enforcement told him that the young man could perform community service rather than be charged if an official organization agreed to take responsibility for his supervision. Ellis said he invented “We Got This” on the spot. Steve Harvey recently featured Ellis’ work on his national daytime talk show.

Examples like this, and the way TRIUMPH interacts with community members and builds on their positive work, is “the epitome of the Wisconsin Idea,” according to TRIUMPH Program Manager Melissa Lemke.