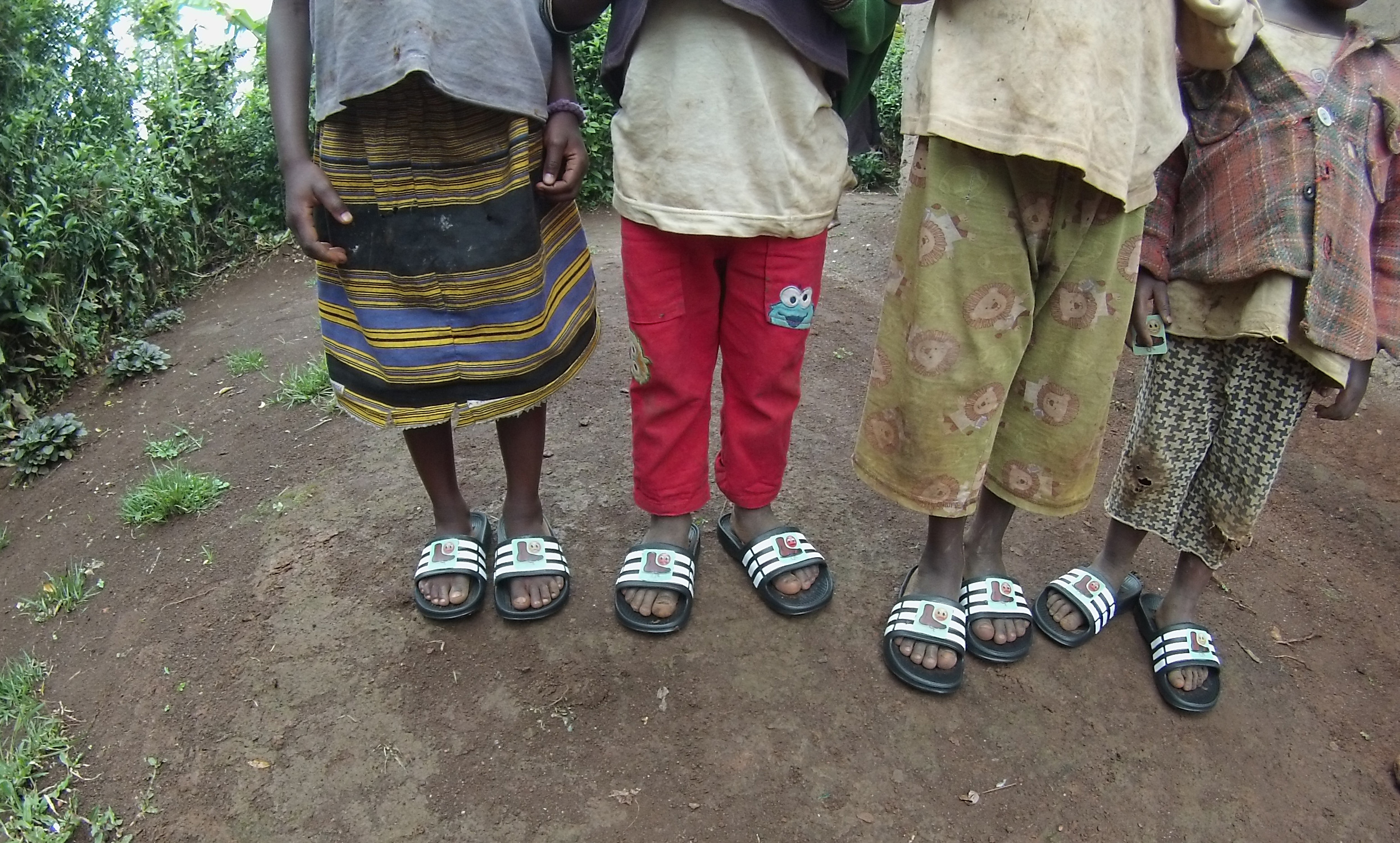 In many parts of the world, a good share of the population wears flip-flops. In America, the candy-colored sandals are a ubiquitous herald of summer. In rural Uganda, kids wear them, adult men and moms wear them whether they’re bopping around the compound, working in the fields or getting water.

For Dr. Tony Goldberg and postdoctoral scholar Sarah Paige at the University of

Wisconsin-Madison, flip-flops present a challenge and an opportunity to overcome illiteracy and better combat helminths, the parasitic worms that can burrow into bare feet and cause gastrointestinal illness.

Thanks to a recent $100,000 Grand Challenges Exploration grant from the Bill & Melinda Gates Foundation, they’re developing the holoflop™ that protects feet from soil-borne parasites and encourages people to wear them.
The holoflop™ is a flip-flop with a hologram attached that will show the benefits of wearing sandals to people who cannot read, says Goldberg, associate director for research at the UW-Madison’s Global Health Institute (GHI), professor of epidemiology in the School of Veterinary Medicine and director of the Kibale EcoHealth Project.

Paige, a medical geographer, works with Goldberg at the university and has been part of the Kibale project since its inception.

Illiteracy is a substantial road block worldwide as public health practitioners try to disseminate information about everything from medication to child vaccinations. With holoflops™, Paige and Goldberg will tap into people’s knowledge of symbols, graphics, pictures and images to deliver the health message. “We are being educated by local people on symbolism that will be relevant to them,” Paige says.

“Grand Challenges Explorations is designed to foster the most innovative ideas to save the lives of the world’s poorest people,” says Chris Wilson, director of the Gates Foundation’s Discovery and Translational Sciences team. Paige and Goldberg’s project, “Flip-Flops and Holograms for Disrupting Helminth Transmission,” was among 81 projects selected for initial Gates Foundation funding from more than 2,700 proposals. The projects address a wide range of issues including using social data for social good, designing the next generation of condom, helping women farmers in the developing world, finding new interventions for neglected diseases and bringing together human and animal health for new solutions.

The science behind holoflops™  draws from Goldberg’s decade of quantitative work on how diseases are transferred between wildlife and humans in and around Kibale National Park.

Soil-transmitted helminth infections are among the most common infections in the world. People and animals shed helminth eggs in feces into the soil, where the worms grow and later infect humans. In Uganda, helminths are abundant in dirt compounds used by humans and animals.

“We’ve been good epidemiologists,” Goldberg says. “We spent years documenting that disease could be transferred between animals and humans and understanding the risk factors that put people in contact with animals, why they might get diseases, what diseases they might be getting, where it’s happening and the effect it’s having on the people and the animals.”

Paige grounds the project in an understanding of Uganda’s complex social systems. All societies have hierarchies, she says. Introducing a new project or product can exacerbate inequities, leaving the poor even more vulnerable. Introducing new technology too quickly can also scare people away from using it. “Flip-flops are something they are already familiar with,” she says. “Using them maintains the status quo.”

Goldberg and Paige are working with a graphic designer and looking for a shoe company. Focus groups in Uganda will help determine the best images for the hologram and colors for the sandals. The researchers will measure whether holoflops™ reduce disease incidence and how they are accepted by the community. “We will also just be popping in on participating households to see if folks are wearing the holoflops and who is wearing them, as well as how well they are holding up,” Paige says.

Goldberg is optimistic, in part because the idea is simple. “I’m excited that the holoflop™ could become widely used to improve health,” he says.

The Global Health Institute, supported by public and private funds, is dedicated to addressing the multi-layered causes of health and disease and discovering sustainable strategies to improve well-being. GHI fosters collaborations that expand the traditional, medical responses to international health crises and include environmental, economic, political and public health strategies.