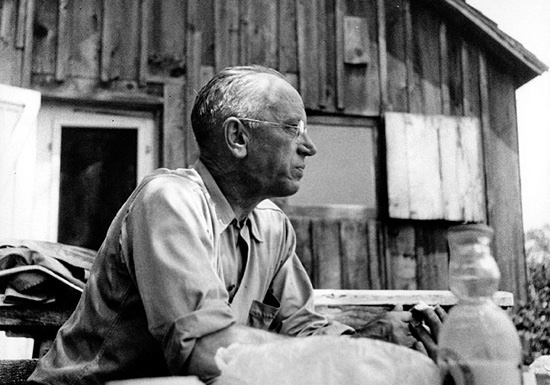 The University of Wisconsin-Madison Arboretum will host the 14th annual public reading of “A Sand County Almanac” and other Aldo Leopold writings on Saturday, March 2, as part of its Madison Reads Leopold community event.

The event is free and open to the public and will take place at the Arboretum Visitor Center, 1207 Seminole Highway, from 9:30 a.m. to 3:45 p.m. The readings are part of Aldo Leopold Weekend, which since 2006 has celebrated the life of the noted conservationist during the first weekend in March.

Starting at 9:30 a.m., former Madison mayor Dave Cieslewicz will kick off the event with a reading of “January Thaw,” the first essay in Leopold’s book. Throughout the day, a mix of public figures and community readers will give voice to Leopold’s keen observations and eloquent conservation philosophy. The readings will include the well-known January-December calendar essays, as well as other pieces chosen for their relevance to the Arboretum, UW-Madison and the state. Listeners are welcome to drop in for their favorite essays or stay all day.

Readers include Madison Poet Laureate Oscar Mireles; radio personalities Jim Fleming and Chuck Quirmbach; Madelyn Leopold, daughter of Luna Leopold and granddaughter of Aldo; and Mark Miller, Wisconsin state senator. Also reading will be a 5th grader from Randall School; a staff member from the USDA Forest Products Laboratory, where Leopold worked when the family first moved to Madison in 1924; plus students, educators, naturalists, writers, representatives of community organizations and others.

Arboretum director Karen Oberhauser will lead off the afternoon readings with excerpts from the speech Aldo Leopold gave at the Arboretum’s dedication ceremony on June 17, 1934. Leopold was the Arboretum’s first research director and was closely involved in its design.

First published in 1949, “A Sand County Almanac” has prompted generations of people to take better notice – and care – of the natural environment. This year marks the 70th anniversary of the publication of the environmental classic.

Light refreshments will be available in the visitor center lobby. Outside food is permitted but must remain in the Visitor Center. Leopold archival materials and artifacts from UW-Madison’s extensive collection will be on display.

A full schedule of readers and essays is available on the Arboretum website. Reading times are approximate; listeners wishing to hear a particular reader should arrive at least 10 minutes before the scheduled time.

Also at the Arboretum during Leopold Weekend:

Leopold Weekend in Wisconsin began in Lodi in 2000, and six years later it became a designated state observance. The first weekend in March was chosen because Leopold appended the date “4th March, 1948” to his “Almanac” foreword. It would be his last writing for the work, since he died unexpectedly six weeks later.

This story first appeared at news.wic.edu.