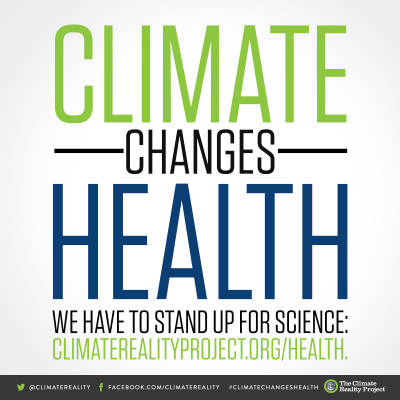 Audiences in Wisconsin will be able to listen in when world experts explore the science, consequences and health opportunities of climate change at Thursday’s Climate & Health Meeting in Atlanta.

The University of Wisconsin-Madison’s Global Health Institute (GHI) joins former U.S. Vice President Al Gore, the American Public Health Association (APHA), the Climate Reality Project, global health programs at the University of Washington and Harvard, and Howard Frumkin, former director of the Center for Disease Control and Prevention’s National Center for Environmental Health, to host the meeting that will be livestreamed beginning at 7 a.m. (CT), Thursday, February 16 with Gore’s opening keynote at 8:30.

The meeting provides a platform for the public health and climate communities to come together to find solutions. GHI Director Jonathan Patz, who has called climate change the biggest challenge – and opportunity — for human and planetary health, welcomes the conversation, and after Gore’s opening keynote, will moderate the opening panel, “Connecting Climate Change and Public Health: State of the Science.”

“Global climate change is one of the most pressing health crises of our time,” says Patz, the John Holton Chair in Health and the Environment with appointments in the Nelson Institute for Environmental Studies and the Department of Population Health Sciences. “And it threatens to undermine many substantial health gains across the world. The APHA has declared 2017 the year of climate change and health, and this meeting marks the first in a series of events that will culminate at the annual APHA conference in November, which is anticipated to be a truly defining moment,” Patz says.

Gore, who is founder and chairman of the Climate Reality Project, was a prime mover in organizing the meeting at the nonprofit Carter Center in Atlanta. “Health professionals urgently need the very best science in order to protect the public, and climate science has increasingly critical implications for their day-to-day work,” he said in a press release. “With more and more hot days, which exacerbate the proliferation of the Zika virus and other public health threats, we cannot afford to waste any more time.” The one-day meeting replaces a three-day conference that was cancelled by the Centers for Disease Control and Prevention.

The meeting comes as 2016, for the third consecutive year, set a heat record, and 16 of the 17 hottest years have occurred since 2001. Ninety-seven percent of the world’s climate scientists agree that climate change is linked to human activity, including the burning of fossil fuels and emission of greenhouse gases. Increasing temperatures, extreme weather and rising sea levels – all connected to climate change – are accelerating global health problems, from malnutrition to the transmission of disease.

For Patz, addressing climate change offers an unprecedented opportunity to benefit human health.  “Global health and the global climate are inseparable,” he says. “Moving toward greenhouse gas emissions policies can yield some of our greatest public health benefits, especially related to chronic diseases.” Patz’s research team at UW-Madison continues to build this evidence.

11:50 a.m. Panel: Protecting Public Health from Climate-Related Threats: Lessons From Across the Globe