Autism spectrum disorder is an important public health concern in the United States.  Individuals with ASD often have lifelong impairments and are at increased risk for a variety of other disabilities and health conditions.  ASD is diagnosed through the observation of behavioral symptoms indicating impairments in social communication and the presence of repetitive behaviors or restricted interests.   Because there is no definitive diagnostic test or biomarker for ASD, a major challenge for population-based studies is establishing a reliable definition of autism that can be applied consistently to the entire population.  In order to use a consistent definition of ASD in its autism surveillance system, the CDC employs trained clinicians to review children’s medical and educational evaluations to determine whether criteria for ASD are present.  The timeliness and resources of the system are challenged by continually increasing numbers of evaluations to review.  This presentation describes some of the challenges with ascertaining ASD in population-based studies and the development of a machine learning approach to potentially improve the efficiency of CDC’s autism surveillance system.

Matthew Maenner is an epidemiologist with the National Center on Birth Defects and Developmental Disabilities at the US Centers for Disease Control and Prevention. His research interests include the causes, consequences, and classification of autism and other developmental disabilities. Matt joined CDC in 2013 as an Epidemic Intelligence Service officer, and received the Virgil Peavy award for excellence in statistical and epidemiologic methods at the 2014 EIS conference. He also deployed to Sierra Leone as part of CDC’s response to the Ebola epidemic. Before joining CDC, Matt completed postdoctoral training in developmental disabilities research at the Waisman Center and received a PhD in Population Health at the University of Wisconsin-Madison in 2011 under Dr. Maureen Durkin’s mentorship.April 4, 2016 – Maenner 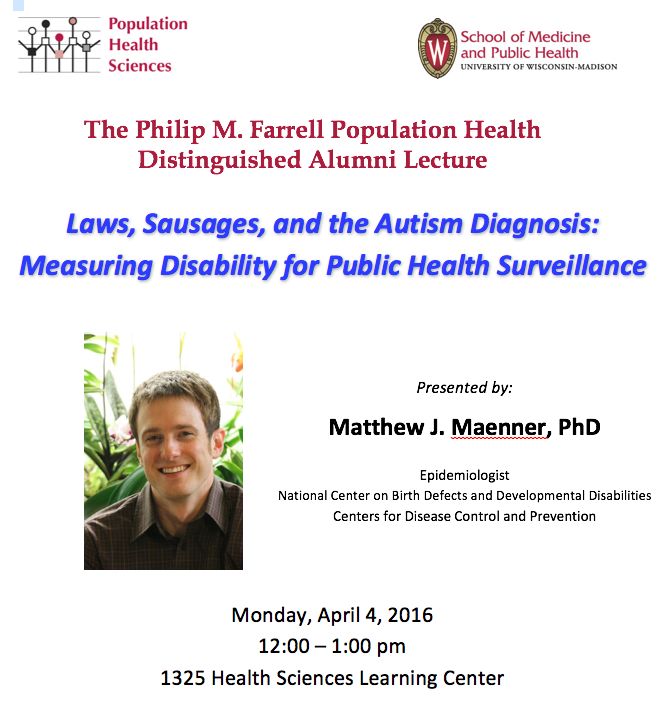