Jonathan Patz, MD, MPH, is professor & John P. Holton Chair in Health and the Environment at the University of Wisconsin-Madison, where he also directs the Global Health Institute. Patz co-chaired the health expert panel of the first Congressionally mandated U.S. National Assessment on Climate Change and was a convening lead author for the international Millennium Ecosystem Assessment. For 14 years, Patz was a lead author for the United Nations Intergovernmental Panel on Climate Change. He was a co-recipient of the 2007 Nobel Peace Prize. 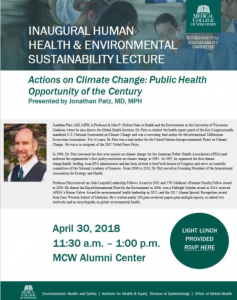