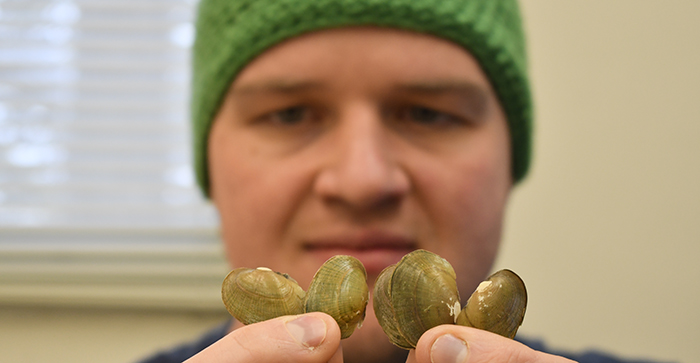 Flowing out of the southern Appalachians, the Clinch River winds between mountains covered by forests and dotted with small farms. Here in southwestern Virginia’s coal country, forests blaze in reds, oranges and yellow each fall. The river, broad and shallow, is home to one of the most diverse population of animals in the northern hemisphere.

This is where Jordan Richard, a U.S. Fish and Wildlife endangered species biologist, is one of the biologists responsible for preserving and protecting the 255 unique aquatic species in the Upper Tennessee River Basin—he calls it the “headwaters of southeastern biodiversity.” More than 80 of those species are freshwater mussels: 32 are protected, 24 are imperiled, and Richard is trying to understand why thousands of mussels are dying each year.

As recently as 2015, Richard and members of his team could each round up as many as 10 pheasantshell mussels in 15 minutes in places like Kyle’s Ford, home to a wildlife management area created to preserve its diversity of freshwater mussels. Now, his whole team might find just five pheasantshells after searching for more than four hours. The pheasantshell population collapsed in 2016—losing 90 percent of its number—and they continue to die.

Poor water quality and toxins are well-known threats to mussels, but this time, the usual suspects don’t seem to fit. Something has changed, and mussels are dying like never before in the Clinch River and across the country, including Wisconsin. “This is not a natural thing, not a human-induced toxic spill, not a point source (of pollution),” Richard says. “Based on our usual tests, there is nothing obviously wrong with the river, and other species are thriving. Disease makes sense.”

Enter the Mussel Mortality Response Team, a collaboration among a half dozen biologists, microbiologists, pathologists and epidemiologists from the University of Wisconsin-Madison, the U.S. Fish and Wildlife Service in Wisconsin and Virginia, and the U.S. Geological Survey in Wisconsin, including the USGS National Wildlife Health Center in Madison. In a research first, they’re looking at whether infections might be killing mussels, either alone or in combination with other factors. The results will help them develop diagnostic tools, leading to better health at mussel hatcheries and, potentially, a way to identify and head off problems in the wild.

UW-Madison Professor Tony Goldberg, an epidemiologist who is also an associate director at the UW-Madison Global Health Institute, is part of the team and has the technology to check for viruses and other pathogens. “We suspect that one of the causes of these mass declines might be infectious disease,” he says. “The problem is, we know almost nothing about the diseases of freshwater mussels.” Goldberg is well-known for his studies of infections in everything from fish to apes as he tries to determine the causes of disease and help identify possible remedies.

“Freshwater mussels are among the most biodiverse, beautiful and ecologically important animals in the U.S., yet few people even realize they exist”—Tony Goldberg, UW-Madison Global Health Institute

North America is home to 300 mussel species, more than anywhere else in the world, and historic accounts tell of river bottoms paved with mussels. Today, more than 70 percent are listed as imperiled, at risk or endangered. Pollution and poisons from manufacturing have taken their toll. Mother-of-pearl button manufacturing in the early 20thcentury decimated whole populations. But those familiar culprits don’t account for what’s happening now, the researchers agree.

Mussels nestle in riverbeds, mostly going unnoticed. Mass die-offs—unlike hard-to-ignore big fish kills—are also hidden but need the same attention. Consider this, Goldberg says: “What does it mean for humans if thousands of animals are suddenly dying in our drinking water—and the problem is widespread? This could be an example of an infectious disease that doesn’t affect humans directly but impacts us indirectly by damaging eco-system services such as water filtration. That definitely does impact human health.”

To be clear, freshwater mussels are not what you order in restaurants, sautéed in wine and served with frites. Freshwater mussels would taste like chewing on rubber, Richard says. These native species also do not include the invasive zebra and quagga mussels overrunning waters across the U.S., including the Great Lakes.

“Freshwater mussels are absolutely ecosystem engineers,” says Richard, who calls himself an angry river biologist because he mostly works with ignored species. He holds up a baggie of shells from the golden riffleshell mussel, which he calls one of the rarest animals on the planet. Ten years ago, biologists began earnest efforts to raise riffleshells in captivity. Trial and error led to a new propagation technique that produced a single batch of more than a thousand riffleshells; some were returned to the wild, and others remain in captivity for their protection.

Watch the video: Why should we care about freshwater mussels?

Mussels benefit the environment in significant ways, and by extension, benefit human health, says Diane Waller, a research fisheries biologist at the U.S. Geological Survey Upper Midwest Environmental Sciences Center in La Crosse. Mussels are filter feeders, feeding on algae and removing sediments and heavy metals from several gallons of water every day. One of Waller’s favorite demonstrations is to put mussels in an aquarium, then muddy the water with silt. In as little as an hour, the water will be clear again while water in a tank without mussels remains cloudy.

Mussels stabilize the bottoms of rivers and, in some places, the bottom is made mostly of mussel shells. They also provide food for other animals. Wisconsin is a mussel mecca with more than 50 species statewide. Healthy mixed populations live in rivers including the St. Croix, the Mississippi, the Mukwonago and the Embarrass. Here’s where you’ll find fat muckets, pimplebacks, snuffboxes and butterflies. There are heelsplitters, monkeyfaces and several “toes,” pig, elk, deer. Examine the mussels and many names become evident in the bumpy, wavy, striped and speckled shells that are colored in dozens of shades of gold, green, black and brown. In many, the insides glisten in pearly shades of salmon, purple, ivory or pink.

Watch the video: How do freshwater mussels get their names?

“Wherever there’s mussel diversity, the healthier the ecosystem is,” says Eric Leis, a fish biologist at the U.S. Fish and Wildlife Service La Crosse Fish Health Center. Or, as Waller explains to Wisconsin’s anglers: “If there’s a healthy mussel population, there’ll be a good fish population associated with it. The mussels need to have those fish too.”

Waller began studying mussels in grad school, lured in by their life history—especially the parasitic stage. These seemingly innocuous creatures are master illusionists when it comes to attracting the specific fish they need to host their larvae, or glochidia. The pocketbook mussel can extend and wiggle a flap that looks like a minnow to attract bass. The rainbow mussel creates a lure that resembles a crayfish. Others bundle the glochidia into packages that look like worms or insects. When a fish strikes, a cloud of glochidia the size of a grain of sand are released to attach and mature on the fish’s gills. The snuffbox mussel clamps onto a fish’s head to release its glochidia into the gills.

Miniature mussels drop off the host fish a few weeks later to begin life on the river bottom.

Field and lab come together

Pollution and water degradation are the usual focus of mussel conservation efforts. By looking for pathogens, this project adds another piece to the puzzle.

The Wisconsin effort began in 2016, when Leis, Waller and Goldberg wanted to see what viruses they would find in Mississippi River mussels. Leis and Waller waded along the river’s edge, feeling for mussels with their feet—it’s called pollywogging—then pulling them out of the sediment for testing. The study became more urgent when Wisconsin Department of Natural Resources discovered die-offs of several mussel species, including the endangered snuffbox mussel, in the Embarrass River. About the same time, the Clinch River began to see massive mussel die-offs.

Richard always gets wet when he goes mussel hunting because he always has his face in the water. That’s why he usually just wears a wet suit and snorkels above the mussel beds, floating in a foot or two of water, picking up healthy and sick mussels by hand. Richard and his team use a syringe to draw hemolymph, or clear blood, from the mussel without harming the animal. Preserved with dry ice, the sample is at Goldberg’s lab within 12 hours.

“We’re hunting for answers using broad-spectrum molecular analysis and good, old-fashioned field work,” Goldberg says. “The lab analysis is of no value without information from the field, but with the field information, lab analyses can provide windows into what’s going on in this ecological setting.”

In the lab, Goldberg uses the same DNA technology that’s used for the human genome project. Mussel samples are run against millions of DNA sequences in the data base at the National Center for Biotechnology Information at the National Institutes of Health. The technique is so sensitive that the first time Richard sent samples to Wisconsin, Goldberg could tell one of the Virginia team had a cold.

On a snowy day in February, Richard joined Goldberg at the computer as results started coming back. Here’s a virus that’s 63 percent similar to a known virus: a cockroach virus identified in China. Another partial match comes from a moth virus and another to a virus found in bats. Fortunately, no infections discovered by the team to date are thought to be transmissible to humans. “We’re getting a sneak peek into the world of mollusk microbes,” Goldberg says. “So it looks very different from what we see in humans or other mammals.”

Identifying potential pathogens infecting the mussels is a work in progress, Goldberg says. “The surprise is that everything has worked so well from the field work to the lab. It’s not a surprise that we’re finding microbes. Everything has microbes.”

Leis’s lab has also been testing for bacteria associated with sick mussels. “At this point we can’t say that the bacteria are pathogenic,” Leis  says. “But we can say that if mussels have a certain bacterial community in their hemolymph, they are likely not doing well.”

Next up is expanding the search to other mussel populations and other die-off events. Soon, the team hopes to develop diagnostic tests for assessing wild populations more quickly and ensuring that only healthy mussels are selected for propagation.

If you spot a mussel die-off in Wisconsin or elsewhere, you can email Leis to report it.

Watch the  video: What does a mussel die-off look like?

In the wake of the United Nations assessment report that 25 percent of the earth’s plants and animals are threatened and 1 million already face extinction, the mussels become a piece of a larger story. It’s an important piece that Richard and the Wisconsin team believe is worth fighting for, and it’s part of the story that is deeply connected to North America and states like Virginia and Wisconsin.

“The whole team has worked incredibly hard over the last two years to make this project happen,” Richard says. “We’ve all simultaneously been sounding the alarm that this isn’t a one-off event. We know die-offs like this happen to mussel populations more often than people think.”

If they can identify key microbes that can infect and sicken mussels, the team can determine what to do next, possibly helping to save the animals before they, too, disappear. “We’ve never seen a mussel population recover after a die-off like this,” Richard says. “When they’re gone, they’re gone. … If we don’t solve the die-offs now, I don’t know if we ever will.”

More about the mussel die-off can be found here.