University of Wisconsin-Madison alumna Erin Luhmann watched skin peel off a boy’s legs, the result of malnutrition. She spoke with women who suffered from obstetric fistulas, many times caused by pregnancies before their teenage bodies were fully developed. She spent three days among Darfuri refugees at a camp in Chad, picking out widows by their symbolic two headscarves. Most of their husbands had been killed in violent attacks on their villages in Sudan.

Luhmann, a 2013 graduate with a master’s degree in journalism, traveled to Chad, Niger and Mali in July 2013 after winning the trip with New York Times columnist Nicholas Kristof, visiting clinics, rural villages and refugee camps. Kristof, who has made a career out of social justice and humanitarian reporting, sponsors Win-A-Trip and chose Luhmann from 700 applicants. She will share her experiences and the difficulties of humanitarian reporting at 5:30 p.m. Monday, Feb. 10, in Gordon Commons. Her talk is co-sponsored by the Global Health Institute and the School of Journalism and Mass Communications.

“When you’re in school, it’s good to sit and talk about issues and gray areas in journalism and social justice,” Luhmann said. “But when you’re on the job, it’s hard to know when to intervene and when to step back.” 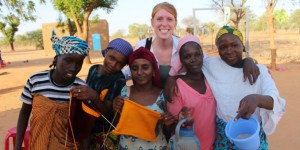 Luhmann, a former Peace Corps volunteer in Kyrgyzstan, says classes at UW-Madison helped prepare her for the trip. In the journalism program, she learned how to use social media as a professional and was challenged to think about ethics in reporting. Gender and women’s studies courses helped expand her world view and gave her the awareness needed for investigating humanitarian issues. She also consulted with faculty who were familiar with customs and current affairs in Niger, Chad and Mali before leaving.

Sometimes Luhmann could intervene abroad. When she and Kristof saw a baby who was suffering from malnutrition, they took the mother and child to a clinic. A doctor showed the woman how to breastfeed properly. In that case, a simple change was all that was needed. In other situations, Luhmann was troubled when she could do nothing more than report what she saw.

“Anecdotes about a specific person add to a story about malnutrition or politics,” she says. “Writing that story doesn’t guarantee that child will benefit, but hopefully it will help the larger picture. You have to find solace in the fact that this will play into a grander plan.”

Social justice journalism is often considered soft news or relegated to human interest pieces, Luhmann says. It’s difficult to make a career out of it, but she’s determined anyway.

“Journalism is about helping elevate voices that don’t normally have the platforms they need to make a change,” she says. “In my opinion, it’s a great honor to be given a platform and reach a large audience, to be trusted with the voices and stories of those who need it most.”

Having a platform is also a large responsibility. Sometimes a journalist can do more harm than good, Luhmann says. Those situations can include interviewing people who have just dealt with a traumatic experience. However, journalists can also empower those suffering.

“You say that you’re a journalist from America, and most people have an idea of what that means,” Luhmann says. “People will say they want to share their story because other people should know, because this shouldn’t happen to other people. It can be a source of healing for those sharing their story, too.”

In her talk, Luhmann will share advice for those interested in humanitarian work, offering tips on how to deal with the ethics of a situation.

“You have a great responsibility,” she says. “You need to be clear headed about the work you are doing so you can continue to move forward and be effective.”

To learn more about Luhmann, read her blog posts from the field.

The Global Health Institute (GHI), supported by public and private funds, is dedicated to improving health today and tomorrow by addressing the multi-layered causes of disease. GHI fosters collaborations that strengthen health care and health systems and encourage the sustainable use of global resources, restore and conserve the ecosystem and address and reverse the causes of climate change. For more information or to learn how you can become part of the GHI community, visit ghi.wisc.edu.