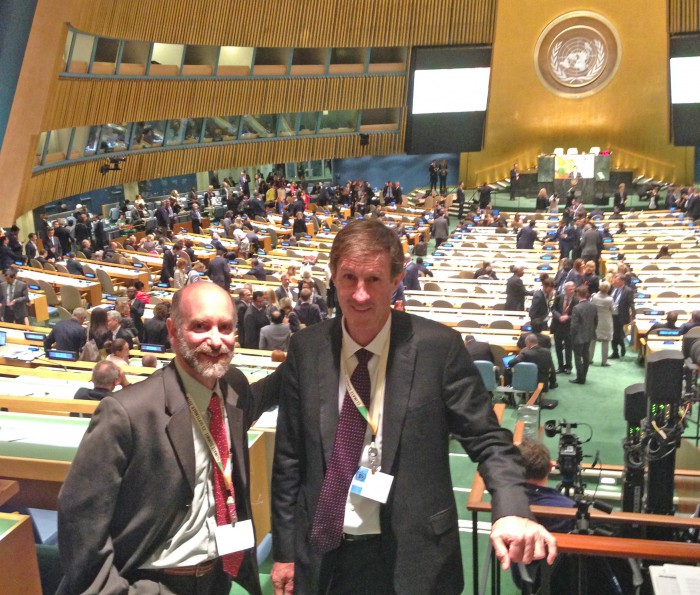 Internationally recognized for his work at the intersection of health and climate change, the University of Wisconsin-Madison’s Jonathan Patz says the new John P. Holton Chair in Health and the Environment will significantly advance this work.

“In light of the current climate crisis and its impact on all aspects of health, John Holton’s gift is timely and will accelerate concerted cross-disciplinary work required to confront global environmental health challenges,” Patz says. The director of the UW-Madison Global Health Institute and professor in the Nelson Institute for Environmental Studies and Department of Population Health Sciences will hold the endowed chair.

Holton is a successful health care entrepreneur and double Badger who appreciates that health is about more than medicine. “Good individual health care requires us to direct our attention to the many areas beyond diagnostic medicine, including the environment, food and water, physical activity, vaccinations and security,” says Holton (BA ’72, MS ’75). The Kenosha, Wis., native who studied history and industrial engineering at UW-Madison, founded Atwork Corporation and SCI to improve hospital efficiency in nursing, surgery, ambulatory clinics and revenue cycles. Atwork twice made Inc magazine’s list of the 500 fastest-growing private companies.

“Dr. Patz is a world renowned leader in the study of the climate crisis and its effect on the health of the world’s population (and) is building a strong team that is focused on solving problems created by the climate crisis,” Holton says.

“I believe it is imperative that the climate crisis be mitigated through solutions that are being developed by programs such as UW’s Global Health Institute if we are to improve health worldwide.”—Entrepreneur John Holton, on endowing the John P. Holton Chair in Health and the Environment

Holding the endowed chair is both a major honor and an incredible opportunity, Patz says. “With this generous gift, which generates an annual stipend, one has the flexibility to take risks, begin novel pilot projects and hire staff and students to work on the cutting-edge. The John P. Holton Chair reinforces my commitment to use and combine all relevant expertise necessary to confront today’s global health and environmental challenges.”

The synchronicity of the timing in Holton’s decision didn’t escape Patz, who has spent his first-ever sabbatical year working internationally on the climate change crisis and writing a book on the subject. Holton joined Patz in September 2014 for the United Nations Climate Summit in New York. Patz then spent the fall semester in Geneva, Switzerland, working with academic institutions and the World Health Organization (WHO) to prepare for the climate change negotiations this December in Paris.

Patz also previously served for 15 years as a lead author for the United Nations Intergovernmental Panel on Climate Change, the organization that shared the 2007 Nobel Peace Prize.

For spring semester, a Fulbright Award took Patz to Ethiopia, where UW-Madison has projects in medical training, climate change, nutrition and more. He has been based in Bahir Dar, which, like Madison, is a university town of about 300,000 on a large lake.

“The fact that most of the world’s population lives in urban areas and that many of the largest cities in 2050 are still on the drawing board suggests that the Institute’s work in helping cities become healthy places to live should have a significant global impact on the quality of life,” says Holton, who also has supported the UW Livable Cities Initiative.

WHO’s definition of health— “a state of complete physical, mental and social wellbeing and not merely the absence of disease or infirmity”—guides Patz’s work. “My research team continues to expand its work toward assessing healthy places as they define healthy people,” he says. “More and more, research shows how our environment determines public health outcomes.”

Holton, with a matching gift from John and Tashia Morgridge, also established chairs in the Colleges of Letters and Science and Engineering.

“The UW and Dr. (David) Gustafson offered me an opportunity that made my life significantly better, and I believe in giving back to the university so that others may have the same opportunity that I had,” says Holton, who studied with Gustafson, a leader in applying industrial engineering techniques to health care delivery systems. “By endowing faculty positions, I believe we will be creating the next generation of Dr. Gustafsons, who will teach, in spire and encourage students to make the world a better place.”