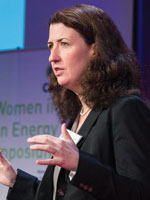 “How air quality and energy affect each other is the single biggest story no one is hearing about,” says Tracey Holloway, UW-Madison professor of environmental studies and chair of this year’s Energy Summit, which will take place on Tuesday, Oct. 13.

Holloway leads the air quality research program at the Nelson Institute’s Center for Sustainability and the Global Environment where she uses computer modeling to understand the relationships between regional air quality, energy and climate. The story of air and energy, in other words, is one that Holloway knows well.

As chair of this year’s Energy Summit, Air & Energy: The Path Ahead for U.S. States, Holloway is inviting experts from across industry, academia, and state and federal regulatory agencies to UW­–Madison to discuss how air quality policies and technologies are currently transforming a variety of commercial sectors and impacting public health.

The U.S. has cleaned up its air considerably since 1970, when it began regulating ground-level ozone, particulates, nitrogen dioxide, and other pollutants. And yet improving air quality in the United States — what has been an environmental success story — also remains an ongoing effort.

“The Energy Summit’s timing,” says Holloway, “is perfect for discussing some big changes coming this year to the air quality world.”

One of these changes is the U.S. Environmental Protection Agency’s (EPA) Clean Power Plan, a major new policy to regulate carbon dioxide, or CO2. Though we may already think of CO2 as an air pollutant, it’s actually a newcomer to the world of air regulation. Unlike traditional pollutants, carbon pollution cannot be pulled out of the airstream using end-of-pipeline technology. As a result, curbing carbon pollution may require a new assortment of technologies, regulations, and changes to the way we source and use energy.

“The issue of carbon dioxide emissions is definitely going to reshape a lot of important connections between the energy sector, the transportation sector, consumers, and air management organizations,” says Holloway.

Holloway also emphasizes the importance of a new ozone limit to be announced by the EPA on Oct. 1, just two weeks before the Energy Summit. The current ozone standard is 75 parts per billion (ppb). Currently, only one Wisconsin county, Sheboygan County, is failing to meet the standard. However, Holloway says the EPA is considering tightening the standard to somewhere between 65 and 70 ppb, and could go as low as 60 ppb.

The interconnected nature of air quality issues means that the Energy Summit will cover a range of topics, including the Clean Power Plan, the new ozone standard, biofuels, building energy use, and the potential for satellite data in air and energy.

Holloway is also building in ample time for networking as well as emphasizing the importance of gathering a diverse crowd. Her panelists have been chosen for their abilities to voice the different perspectives represented by government agencies, industry, and research institutions. And students, faculty, industry leaders, regulatory representatives, and researchers alike are all encouraged to attend and take an active part in the summit.

“The Energy Summit is about bringing different people together to think through some of the most difficult challenges of our time,” says Holloway. “Without a doubt, air quality as it relates to energy is one of those big challenges.”

Organized by the Wisconsin Energy Institute, this year’s Energy Summit will be held at the Wisconsin Institutes for Discovery and Union South on the UW–Madison campus.