"It's one thing to read about health problems in literature, but another entirely to see them on the ground."

“It’s one thing to read about health problems in literature, but another entirely to see them on the ground. (The field experience in Uganda) is what set it in stone. I want to be part of this.”

As soon as DeMarco Bowen was accepted into medical school at the University of Wisconsin-Madison, he immediately applied to the Global Health Graduate Certificate program offered through the Global Health Institute (GHI).

He had already been involved with global health as a UW-Madison undergraduate, completing a field course experience in Uganda. His project was a directed study in sociology, comparing the epidemiology of HIV in Uganda and South Africa, and he was fascinated with the virology of HIV. 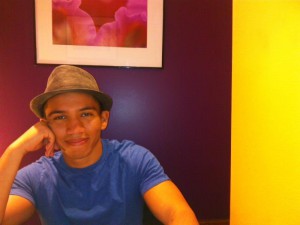 In the 1980s, Uganda started with one of the highest rates of HIV, and South African had almost no problems, Bowen said. Uganda’s then newly elected president, Yoweri Museveni, took the initiative to reduce any stigma attached to HIV and began an educational strategy based on abstinence, monogamy, condom use and, more recently, empowerment. South Africa denied HIV was a problem.

Today, Uganda has the lowest HIV rate in sub-Saharan Africa, and nearly one in three South Africans is infected.

The undergraduate Global Health Certificate had not been launched when Bowen, who’s just completed his first year of medical school, joined the GHI field course as an undergraduate student. So he was especially interested in finishing the graduate certificate. To him, the certificate will help supplement his MD and MPH education, and it will help give him the tools to work in a global health field. The GHI electives introduce students to health care in diverse communities, he said. “They really understand that local is part of global, under the right context.”

This summer, Bowen visited Ethiopia for graduate field work, where he studied the prevalence of HIV and Hepatitis B and C in the emergency department in an Addis Ababa hospital.

A Milwaukee native, Bowen hadn’t traveled out of the Midwest until a winter break college trip to California. He likes to travel and wants to integrate it into his life. He said he quickly learned to appreciate the Ugandan culture, which welcomed him. “When you don’t have a lot of resources, you have to rely on each other,” he said, speculating there may be an inverse correlation between resources and a rich social structure.