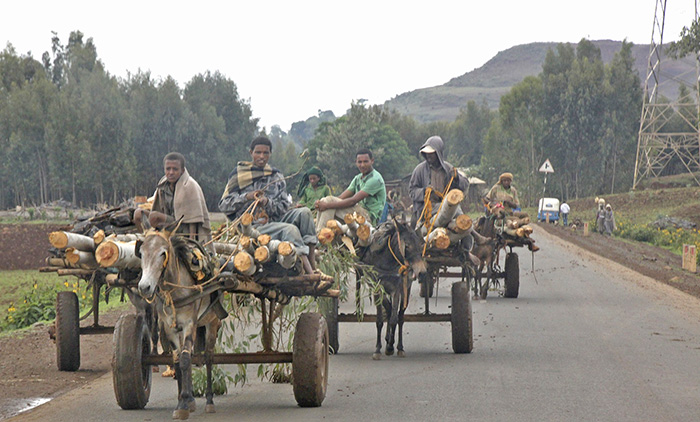 The global health ethic calls for protecting the land and people now and for the future.

“Widening health disparities, pollution of the land, water and atmosphere, and the emergence of new and zoonotic infections threaten everyone. How can we, as a society, commit to addressing issues of such magnitude, for which the pace of progress will be measured in generations?”

– Tony Goldberg and Jonathan Patz in The Lancet

Global health has little chance of lasting success without an underlying ethic that recognizes “the health of each of us is linked to the health of all the rest,” the University of Wisconsin-Madison’s Tony Goldberg and Jonathan Patz write in “The need for a global health ethic,” published today in  the online version of The Lancet.

Simple fixes based on economic incentives or projects addressing immediate problems are not enough, write Goldberg, GHI associate director for research and John D. MacArthur Chair in the School of Veterinary Medicine, and Patz, director of the Global Health Institute (GHI) and the John P. Holton Chair in Health and the Environment with appointments in the Nelson Institute for Environmental Studies and the School of Medicine and Public Health.

In the face of mounting, complex global challenges, Goldberg and Patz suggest a marriage of science and philosophy that could become the “single, deeply internalized central guiding principle” to galvanize world global health efforts, guide community commitment and inspire a change of heart. By acknowledging the interdependence of human, animal and ecosystem health, they join Wisconsin conservationist, the late Aldo Leopold, and Pope Francis in recognizing problems cannot be solved in isolation.

“The global health ethic is all about an approach to help somebody without hurting someone else.”—Jonathan Patz

“We want a more holistic approach that encompasses longer-term issues, including next generations and what an intervention might do to natural resources,” Patz says. “We’re trying to provide more guidance and a higher goal under which all global health would operate to be more lasting and fair.”

The global health ethic grows out of Leopold’s call in his 1949 book, “A Sand County Almanac,” for a land ethic that defined humanity as part of nature, not its conqueror. Leopold saw soil erosion, water pollution and the loss of wildlife as interrelated symptoms of “disorganization in the land … similar to disease in an animal” and looked for an ethic that “reflects the existence of an ecological conscience.”

Faced with climate change, ecosystem degradation and human suffering, Pope Francis in May made a similar plea in his encyclical on the environment. He calls for a conversation that includes everyone to address the environmental crisis—to care for a vulnerable and integrated ecology, to not misuse creation and to work for the good of all and “our common home.”

Leopold sought to establish a new ethical norm, encouraging people to think in a new way about their relationship to the land, Goldberg says. The global health ethic is a new way to think about the enormous, multi-faceted health challenges facing the planet. “If we really want to improve global health, we have to accept in our hearts and minds that health around the globe is an ethic worth striving for.”

Leopold’s suggestion that land—soils, waters, plants, animals and people—represents an interconnected community was radical in the late 1940s. “Now, we increasingly see and appreciate those linkages,” says Curt Meine, senior fellow with the Aldo Leopold Foundation in Baraboo and the Center for Humans and Nature in Chicago. “There’s an environmental dimension to all health issues.”

Meine is delighted to see colleagues from diverse fields, from ecology to human health, economics and theology, building on and extending Leopold’s work. “The global health ethic is a new expression of the continually evolving land ethic,” he says. “It articulates an integrated ethic of care and concern for our neighbors, the land, future generations, other species and ecological communities.”

The global health ethic provides a framework in which to understand and respond to global issues, including human health concerns and root causes of disease, Meine says. “Think of how these big categories interact: Science tells us how the world works; policy involves the ways in which we govern ourselves; ethics provides the essential values context in which we draw upon science to govern ourselves.”

Patz identified climate change as an ethical dilemma as lead author for a 2007 paper in EcoHealth. “Climate change … poses a unique and ‘involuntary exposure’ to many societies, and therefore represents possibly the largest health inequity of our time,” he wrote.

“Each and everyone one of us, individually and through our relationships, will experience an intense consciousness of health, whether we live in a city in Africa or the woods of Wisconsin.”—Goldberg and Patz

Six years later, he and Goldberg see well-intentioned projects go awry because they do not consider longer-term issues. Today’s interventions must be evaluated in light of their effect on the next generations, they say. Their impact on natural resources must be considered.

The ethic is central to the work of the Global Health Institute, which looks for connections among UW-Madison and Wisconsin and world communities and between the complex, intertwined causes of disease. Just as Leopold saw links between the health of humans and the land, GHI sees how health is affected by causes from drought to food insecurity to burning fossil fuels to violence against women. “You can’t have healthy people living on a sick planet,” Patz says.

The global health ethic must become as ingrained as the ethic of democracy is in the United States, Goldberg says. Americans showed in World War II that they would not tolerate a system that doesn’t include democracy. “That’s the level at which we should approach global health,” he says.

Goldberg and Patz recognize that their plea for a global health ethic may seem quixotic in “the present, resource-limited, hypereconomised world.” Their hope lies in the recognition of basic human needs. “Each and everyone one of us, individually and through our relationships, will experience an intense consciousness of health, whether we live in a city in Africa or the woods of Wisconsin,” they write. “Perhaps this shared reality might yet inspire the development of a global health ethic that all of society eventually embraces.”