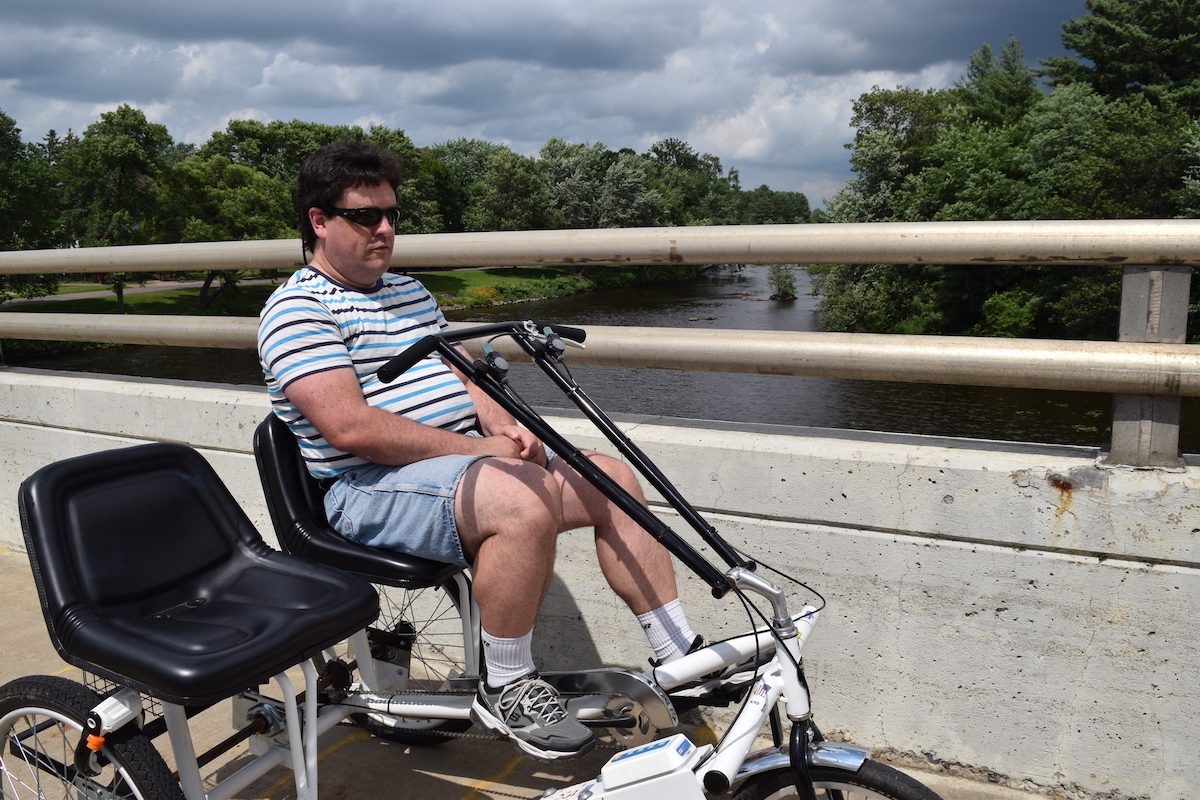 WISCONSIN RAPIDS – On a blazing hot July afternoon, cooled with only a hint of a breeze, I am pushing pedals on a three-wheel, two passenger trike. To my left, Will Hascall is doing the same thing, with more experience and better results, as we labor up the Jackson Street bridge in Wisconsin Rapids.

Hascall is a “bike-share ambassador” for the Bike Share Initiative, which in April set out 33 bikes at six locations in Wisconsin Rapids, a Central Wisconsin city of about 18,000.

The bikes can be rented by the hour and returned to any location.

Behind us is the city’s zoo, site of the phone-activated bikeshare station where Hascall signed out the trike, one of three “accessible bikes” in Wood County’s River Rider Bike Share Initiative. Across the Wisconsin River is our goal: a refurbished segment of the 24 miles of bike-hike trails in Wisconsin Rapids.

But in between is the surprisingly gnarly slope of the bridge.

At my insistence, Hascall and I share the piloting duties, but when I lift my hand from the steering gear, he reminds me, “You’re letting a blind man steer.”

Bike share is supported by the Wood County Health Department, as an effort to combat chronic disease. In 2018, the program received a $50,000 grant from the Wisconsin Partnership Program at the University of Wisconsin–Madison School of Medicine and Public Health.

“We are seeing an increase in the rate of obesity every year, and that’s a major contributor to heart disease, the number two cause of death in Wood County,” explains Sarah Salewski, health promotion and communication specialist.  “When you think about things that can prevent heart disease, eating well and getting physical activity come immediately to mind.”

Our three-wheeler, together with two tandems which also can allow visually impaired people to ride, is part of the effort to involve the entire community in the outdoor, health-promoting activity of biking.  “We want to make sure it is equitable, and we are working to decrease barriers,” says Salewski. 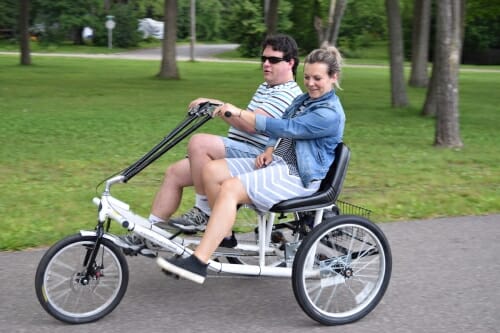 Sarah Salewski, who handles health promotion and communication for the Wood County Health Department, and Will Hascall check out a side-by-side tricycle. PHOTO BY DAVID TENENBAUM

Biking can also combat isolation and increase community connections, Salewski adds. “When ride a bike, you are more likely to meet people you know. You notice things more on a bike, and are more likely to visit businesses and local destinations.”

The bike share allows four levels of involvement, from a $20 annual membership to a basic, $1/hour rental.

Hascall, 47, who is studying non-profit communication for a master’s degree at UW-Stevens Point, has been working with bike share in Wisconsin Rapids since it began as the volunteer-run “River Riders” system in 2012. His interests range from political science to emergency communications. “I like to be outside,” Hascall says, “and if you believe in something, you have to help make it happen.” In return for free rentals, he visits farmers markets and bikeshare locations to talk about the program.

This year, the program is operated by Zagster, a business that focuses on “micromobility,” via a variety of wheeled vehicles.

The Wisconsin Partnership Program’s grant funded planning and implementation, including community workshops, focus groups and a survey.  The grant program recognizes that the health of a community depends on a strong foundation that is built upon things such as access to transportation and an environment that promotes well-being.

“By expanding its bike share program in an equitable way that addressed its community’s specific needs,” says Eileen Smith, Partnership director, “this project has been successful in creating a more accessible program, which contributes to positive health outcomes for everyone.”

The Partnership’s grant “helped us decide on prices, membership categories, bike locations and the type of bikes to get so we could serve the entire community,” says Salewski. “Where do you want the bikes to be parked? How much are you willing to pay to use a bike? Our current program was informed by input we received through community conversations funded by the Partnership grant – which also purchased all three accessible bikes for us.” 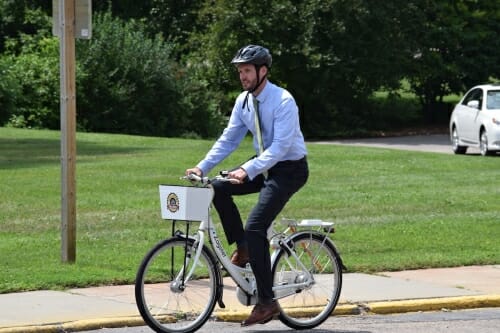 Bike-share also fits a larger vision for the community, says Mayor Zach Vruwink, who has his own membership in the program. “We have long invested in public recreational trails for a variety of users, and bike share is another step in creating a more recreation-friendly community.”

The bike share, and the UW–Madison help in aligning it to community needs, is also recognition that small can be beautiful, too, Vruwink says. “People tend to think that bike shares can exist only in bigger cities. Wisconsin Rapids is not that big, but we strive to blend small-town charm with big-city amenities.”

As we lock up, Hascall makes an electronic note about a needed repair on his phone app.  The brakes seize the rear wheels, and the trike awaits its next riders.