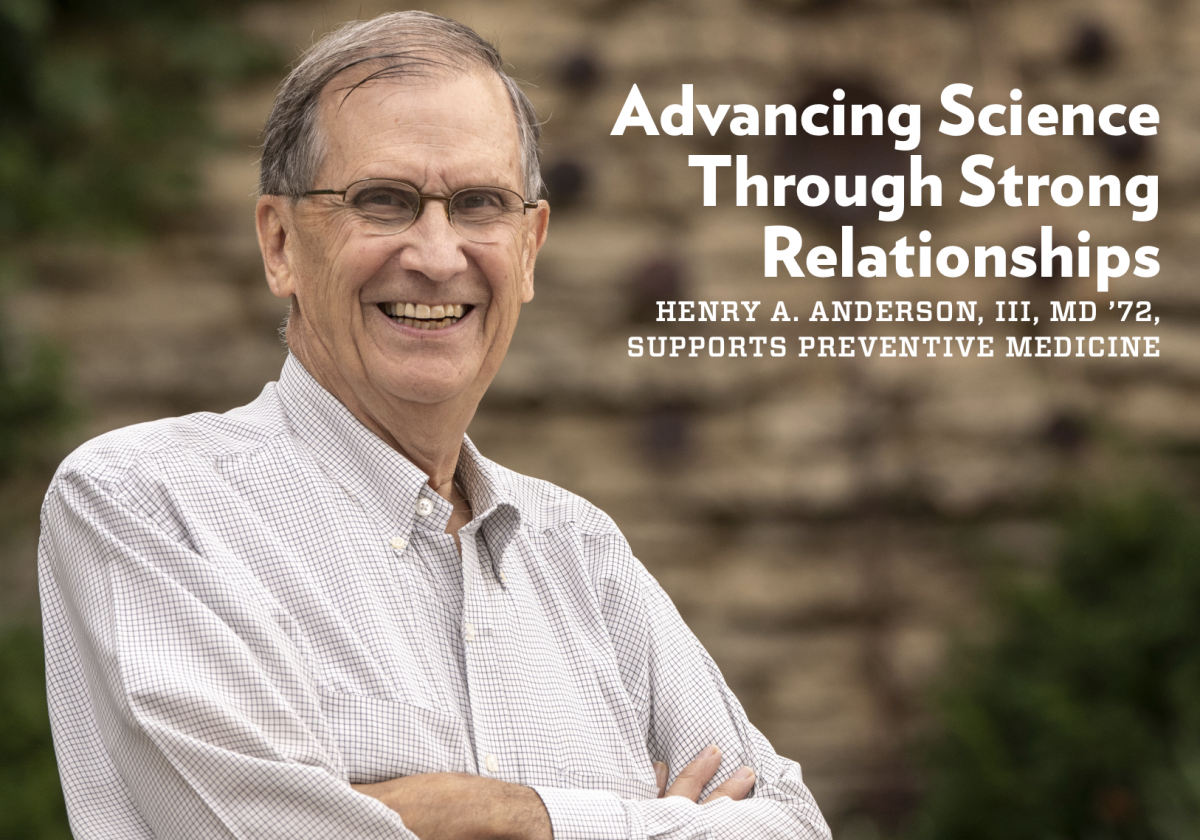 Early in his career as Wisconsin’s state epidemiologist for environmental and occupational health, Henry A.“Andy” Anderson, III, MD ’72, and his colleagues in the Wisconsin Division of Public Health responded to help the city of Superior assess the health impact of a train derailment that released a cloud of petroleum distillate that drifted over the community—resulting in health complaints. Nearly 25 years later, that community found itself addressing different concerns related to an outbreak of lead poisoning in a shipyard. When public health staff met with area leaders to evaluate it, the community wanted to work with the same people who assisted them “way back when,” recalls Anderson.

Laughing, he recounts, “We were surprised because the first time, we had thought, ‘Oh, these people were angry, didn’t trust the government and were reluctant to work with us at all!’ But for the same community to remember us years later shows how important long careers—and relationships—are to moving science forward in the best interest of preventive medicine.”

Equally important is the trust those relationships denote. For example, hazardous exposure to noxious substances often is detected first in the workplace, where exposure is at its highest, yet the act of health department officers investigating a potential risk can negatively impact a business.

After all, Anderson explains, “If you get funding for a research project, it’s because there may be a problem worth investigating.”

It takes diplomacy to communicate a health advisory without unnecessarily threatening an entire industry, something that—as a fisherman himself—Anderson kept in mind as he recruited a cohort of Great Lakes fishing captains in the 1980s to measure their levels of dangerous polychlorinated biphenyls (PCBs) from the fish they ate. Upon detecting PCBs in their systems, the department’s subsequent fish advisory recommended that consumers avoid a heavy diet of lake trout and larger fish such as walleye or pike. Instead, it advocated restricting one’s diet to smaller, younger fish.

“We want people to understand the nuances,” Anderson says of the unintended harm poorly communicated advisories can have on a community’s livelihood and on decisions made by elected officials or an industry.

“While our findings were based on a limited number of people, we were able to distinguish between the PCBs we’d identified earlier in fish,” Anderson notes, adding that this time, biomarkers revealed the source of the new POPs was fire retardant chemicals present in the fish but primarily in the fishermen’s homes, related to inhaled or ingested dust from disintegrating furnishings.

“A real advancement was the discovery of biomarkers [in water and blood samples] that are objective that people cannot control like subjective symptoms,” he says. “They provide scientists with objective signs and reduce the risk of unnecessary blame.”

Years later, that same cohort once again provided Anderson’s team with an insight. This time, the researchers could observe the relationship between PCBs and other POPs and blood markers of thyroid disease and other endocrine disfunction, such as diabetes that developed in their advanced years. Had Anderson’s fish advisory program from the ’80s caused unnecessary alarm, he may not have had the opportunity to continue working with this cohort. Clearly, an epidemiologist’s responsibilities can be delicate.

A Story of Wisconsin’s Health

For nearly four decades, Anderson’s research and leadership shaped policies and programs that protect Wisconsinites from hazards in their air, water, soil and food. From Great Lakes fish consumption to well water contamination, lead poisoning and asbestos exposure, his hundreds of research publications read like a history of the state’s collective health over the past 40 years.

“Our goal always has been for research to advance science toward prevention. We wanted to evaluate the effectiveness of our advisories and prevention programs,” he says.

While he ventured to Stanford University to earn his bachelor’s degree, Anderson returned to his home state to earn his medical degree at the University of Wisconsin School of Medicine and Public Health (SMPH), the alma mater of his father, Henry A. Anderson, Jr., MD ’32, a pulmonologist and medical director of a tuberculosis sanitorium in Stevens Point.

After an internship and an occupational and environmental medicine residency in New York, Anderson joined the Wisconsin Department of Health Services in 1980 and continued there until he retired as chief medical officer in 2016. A year later, he received the Wisconsin Medical Alumni Association’s Ralph Hawley Distinguished Service Award, which recognizes outstanding contributions to an alum’s community through medical practice, teaching, research, or humanitarian activities.

Anderson’s service continues in retirement. His role as an adjunct professor in the SMPH’s Master of Public Health Program relates to work in the SMPH Department of Population Health Sciences and the UW-Madison Gaylord Nelson Institute for Environmental Studies.

Beyond UW-Madison, he serves on the U.S. Environmental Protection Agency Science Advisory Board’s Chemical Assessment Advisory Committee; the Presidential Advisory Board on Radiation Worker Compensation; and the National Academies of Science Roundtable on Environmental Health Sciences, Research and Medicine. He is an associate editor of the American Journal of Industrial Medicine, among other editorships.

Support for the Next Generation

In 2017, Anderson embarked upon a new means to support the future of community health promotion and disease prevention: he created the Henry A. Anderson, III, Endowment for the Advancement of Preventive Medicine, which provides funding for students in a variety of training programs. Among them, in the UW Global Health Institute, the Henry Anderson, III, Graduate Awards in Environmental, Occupational and Public Health provide travel funds to medical, veterinary and nursing students who conduct field research abroad.

For Anderson, helping students tackle environmental diseases in international arenas goes beyond a means to address global health concerns. He recalls the four months he spent in Afghanistan as a third-year medical student—working alongside Afghani counterparts to set up rural clinics—as a turning point in his commitment to public health.

“Seeing outbreaks of measles and other serious diseases impressed upon me how important preventive measures, such as antibiotics and vaccines, are to the health of a community,” Anderson notes.

On the domestic front, his endowment advances preventive medicine training each year by covering the cost of books and board exams for new residents in the SMPH Preventive Medicine Residency Program. He wants to make sure this support sends the message to trainees that their work is important and increasingly valuable.

Even so, securing the resources to train an increasing number of physicians with the required breadth of knowledge and skills in these areas proves challenging. Although clinical residencies receive federal support related to the extent that they provide Medicare and Medicaid services, Anderson points out that preventive medicine residencies are classified as non-clinical, even though some, including the SMPH program, offer practicums and clinical rotations in large hospitals, community health clinics, and state and local public health departments.

Despite these challenges, Anderson is confident about his alma mater’s capacity to meet the changing demands of training preventive medicine and public health professionals.

Since fall 2005, when the SMPH became the nation’s first school to fully integrate medicine and public health, it has established myriad programs to address society’s most challenging health-related problems. This shift built upon years of work refining the school’s education, research, clinical care and community service missions.

“I’m impressed that there is a growing interest in prevention at the health care system, and the UW School of Medicine and Public Health is making great strides in this direction,” he concludes.

This story first appeared at med.wsc.edu/quarterly.