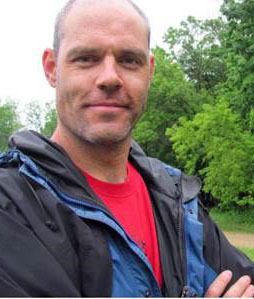 Robin Mittenthal, who touched hundreds of student lives as manager, advisor, mentor and field course leader for the University of Wisconsin-Madison Undergraduate Certificate in Global Health, died suddenly this weekend following an accident at his farm.

“Robin was a very thoughtful, passionate family man,” says Sherry Tanumihardjo, professor of Nutritional Sciences and director of the undergraduate certificate. “His family was the most important thing to him. Some of this passion rubbed off in his mentoring of hundreds of students.”

Mittenthal managed the certificate program from just after its inception in 2011 to spring 2017, when he became center coordinator at the Upper Midwestern Regional Center of Excellence for Vector-Borne Disease.

Employed by the Department of Nutritional Sciences at the College of Agricultural and Life Sciences (CALS), he was a central contributor to the development and coordination of the undergraduate certificate. The program is co-sponsored by GHI and CALS.

Robin was one of the best advisers and mentors I had on campus and I always looked forward to reading his global health news emails #RIPRobin #globalhealthcert https://t.co/hQFKhXul5p

As an administrative manager, Mittenthal dedicated countless hours organizing the program and advising students. “Robin was involved right from the start of the undergraduate certificate in global health,” says Jonathan Patz, director of the Global Health Institute. “The early success of the new program was due, in no small part, to his unfailing dedication and caring for the experience of each and every student.”

“Robin was an intelligent, caring and loved advisor by hundreds of students,” says Lori DiPrete Brown, associate director for education and engagement at the Global Health Institute and an undergraduate certificate leader. “He cared deeply about education, the environment and the way food systems related to health, but most importantly, his family was the center of his life.”

Mittenthal’s vibrant spirit as an advisor and educator predated his engagement with the certificate program. He served as an agricultural advisor with the Peace Corps in The Gambia during the mid 1990s and worked as a librarian and teacher for K-12 students.

This is such sad news. Robin was one of my most thoughtful advisors at UW. RIP https://t.co/kbXckkFcCH via @badgerherald

At the Upper Midwestern Regional Center of Excellence for Vector-Borne Disease, Mittenthal was responsible for coordinating partners in five states and tracking the center’s progress in addressing vector-borne disease challenges. Susan Paskewitz and Lyric Bartholomay, co-directors of the Center, admired the radiance Mittenthal brought with him.

“People have said so many amazing things about him — his passion for what he did, caring for students, sense of humor and intelligence,” Paskewitz says. “One of our students said he was like a perfect human being.”

In a GoFundMe campaign to contribute to the education savings accounts for Mittenthal’s children, Bartholomay wrote: “Robin Mittenthal had a rare gift for connecting to other people. He gave us his time, his undivided attention, his radiant smile, his stories that spanned an unbelievable repertoire of life experiences, his infectious enthusiasm, his thanks and his encouragement. In so doing, he touched lives of countless colleagues in entomology and CALS, of hundreds of undergraduate advisees in the Global Health certificate, and of the students, staff and colleagues in and surrounding a new center on campus for mosquito and tick-borne disease.”

UW senior KM Barnett met with Mittenthal last week about plans for next semester’s work at the center. The short meeting became two hours to visit about her long- and short-term career goals. She remembers: “At the end of the meeting, he said to me, ‘I am so excited for all the things you’ll do.’ His words warmed me with comfort and confidence. … I am grateful for Robin’s keen ability to listen and say the right thing at just the right time.”

Sweta Shrestha, program manager for the Wisconsin Population Health Service Fellowship Program at the Population Health Institute, worked closely with Mittenthal during her time as GHI’s assistant director for education, especially in the early stages of the certificate program. “He was larger than life, and he cared so deeply,” she says. “There are so many students he’s impacted. He wanted to nurture every student, and he did — he put everyone else ahead of himself. If a student needed a recommendation letter and he was up to his ears in work, he wouldn’t hesitate to say yes.”

Across campus, students mourn. Samuel Park, a senior with a Certificate in Global Health, remembers Mittenthal as a kind-hearted, passionate advisor. “He will forever be remembered as a shining light in the campus community who inspired many, many students to pursue careers in support of our collective health,” says Catherine Goslin (’17), who earned her undergraduate certificate.

A caring mentor and tireless advocate for students. You will be missed Robin. https://t.co/BUS67h7aM1

Unbelievable loss to #globalhealth and @UWMadison. Thinking about Robin Mittenthal, his family, and my @UWGlobalHealth family right now, where it all started for me https://t.co/jzfdM8gCxz

Mitthenthal’s impact resounded across campus. Prior to working for the certificate, he served as chairman of the board overseeing the Eagle Heights Community Gardens while pursuing his Ph.D. in entomology, studying how organic fertilizer affected insect pests.

“He tried to infuse his love of the land and earth with his job,” Suri says. “Farming was his love and passion, and his dream was always to have a farm.”

A dream that came to life in Little Mammoth Berry Farm, LLC, a farm on a beautiful plot in Belleville, Wisconsin, that will reflect the energy and compassion of Mittenthal, it’s builder, for years to come.

Mittenthal was 43. He is survived by his wife, Daniella Molle, and their two children.

“He was a salt of the earth kind of guy,” Shrestha says. “He was so good, and so honest. The spaces he made for students were his way of showing how much he cared about global health, and the spaces the land makes for us.”

Mittenthal was remembered at grief sessions for faculty and staff, and students, Tuesday.

His funeral will be at 11 a.m. Saturday at Cress Funeral Home, 6021 University Avenue. Visitation for family and close friends begins at 10 a.m. His obituary has been posted.